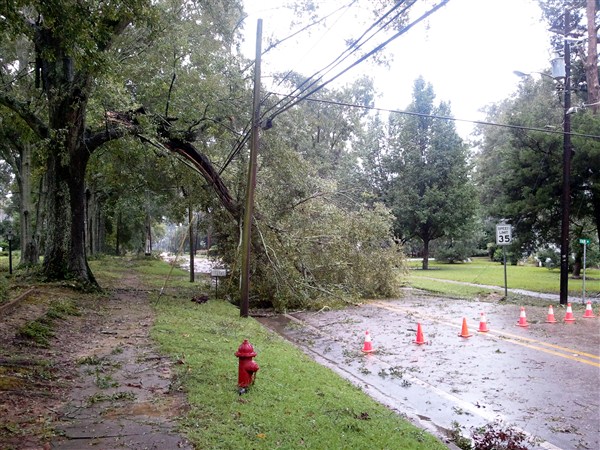 NO THRU STREET- This large limb fell on utility wires and blocked traffic on Extension Street in Hazlehurst after Isaac blew through here on Wednesday and Thursday.

Tropical Storm Isaac has moved far enough away from the area that the torrential and persistent rains and high wind gusts have subsided enough for utility companies to begin restoring power and water to affected areas in Copiah County.  The worst of the storm is over, but flooding will remain a problem in some areas for several days. Radar estimates show that most of Copiah County received up to 8 inches of rain during the event.

Low-lying areas and those along creeks and streams will see the worst of the flooding.  Several roads in Copiah County may be underwater for 24 hours or more.  Drivers are urged to err on the side of safety and “turn around, don’t drown”, staying away from water-covered roads.

Power has been restored to downtown Hazlehurst, though a large limb that was ripped from a tree on Extension Street by high winds earlier today has shut off power to that part of Hazlehurst. The limb remains blocking the road, while damage crews attempt to figure out how to remove it.  Traffic has been diverted around the area.via Fahler Street to Sinclair to Fair Streets  (see photo above).

Most businesses that have been shuttered since Wednesday afternoon will be able to re-open on Friday morning in and around Copiah County.