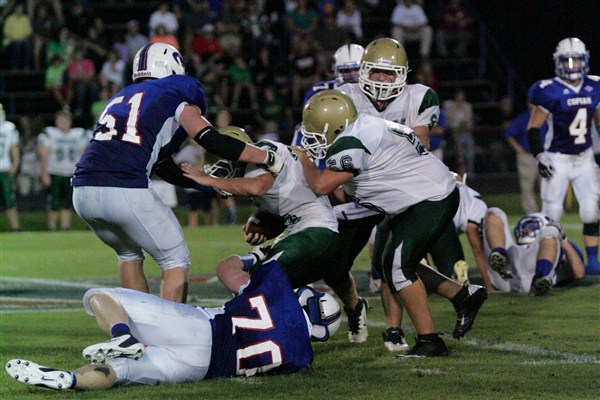 The Homecoming matchup in Gallman last Friday night pitted Copiah Academy head coach Scotty Cline against his former mentor, Mitch Mitchell, now the head coach at Central Hinds Academy. And on this particular night, the mentor prevailed. The Cougars scored a pair of touchdowns in the third period and survived a late rally by the Colonels to register a 13-7 victory. With the loss, Copiah slipped to 0-3 on the season, while Central Hinds improved to 2-1.
Neither team could push across a score in the first half. Luke Peavey ran the opening kickoff back from the 18 to the CA 36. Three plays later the Colonels were forced to punt.
Moments later, the Cougars’ Brian King galloped 53 yards before Dillon Martin made a TD-saving tackle at the Copiah 12. On 3rd-and-8, Ty Quick sacked quarterback Skyler Price for an 11-yard loss, and Mason Sollie was wide left on a 37-yard field goal attempt.
The teams swapped possessions until the Cougars shanked a punt, giving CA a first down at the Central Hinds 30. The Colonels failed to capitalize and punted deep into Cougar territory. Three plays later, Landon Corkren got his team out of a hole with a 60-yard run, only to have the ball knocked away by Dillon Martin and recovered by Bryce Berry at the CA 23.
The Colonels quickly moved into Central Hinds territory thanks to hard running by Sam Stevens and Thomas Roberson, but lost the ball on a fumble that was recovered by the Cougars’ Corkren. The Copiah defense held, giving the offense one last chance in the opening half. Three straight first downs set up Thomas Roberson’s 38-yard field goal attempt with 4 seconds remaining. However, the kick was just short, leaving the teams tied 0-0 at intermission.
Central Hinds wasted little time as King broke through the middle on the first play of the second half and raced 65 yards for a touchdown. Sollie kicked the PAT, and the Cougars led 7-0 just 16 seconds into the third quarter. Central Hinds got the ball back two minutes later and marched 73 yards in 7 plays, with Price scampering 22 yards for a touchdown on 4th-and-one. The PAT attempt was blocked, and the Cougars led 13-0 with 5:23 remaining in the third period.
After the ensuing kickoff, the Colonels marched 63 yards in 17 plays, only to lose the ball on a fumble recovery by Central Hinds’ Mason Sollie early in the fourth quarter. Highlights on the drive included an 11-yard pass completion from Ryan Drew to Bryce Berry, an 11-yard run by Drew, and a pair of fourth down conversions by Stevens.
The Colonels got the ball back with just under five minutes left and their first-team quarterback on the bench after being shaken up. A pass interference call on the Cougars gave CA a first down near midfield, but on the next play Central Hinds’ Skyler Price intercepted a Justin Edwards pass to halt the threat.
Copiah got the ball back near midfield with just under two minutes remaining. Three plays later, Edwards launched a pass intended for Bryce Berry. The defender knocked the ball away, but it deflected right into the arms of CA’s Peyton Murphy, who took it the rest of the way for a 38-yard touchdown. Roberson kicked the PAT, and the Colonels trailed 13-7 with 1:34 remaining. Any slim hopes of a miracle comeback ended when the onsides kick failed to go the required ten yards, allowing the Cougars to run out the clock.