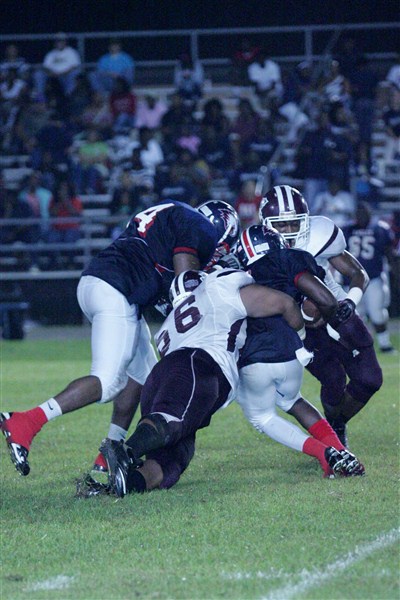 Indians pick up nice win at East Marion; play at Prentiss on Friday

The East Marion Eagles, a team that competes in Region 8-2A and which finished runners-up in state 2A in 2011, found out on Friday night what five other teams on the Hazlehurst Indians’ football schedule have found out this season:  These Indians are bigger, stronger, faster, smarter and better coached than themselves.  They did so to the tune of a 26-8 whipping by the Indians, who have improved to 6-0 and begin Region 7-3A play this week at Prentiss.
Hazlehurst got a standout performance from senior running back/linebacker Demetrius Cain.  Cain rushed for 192 yards on just 11 carries and scored a touchdown.  At linebacker, he intercepted a pass that he returned for a touchdown, recovered a fumble and caused a fumble.
Cain and the other Hazlehurst backs benefitted from another solid performance by the forward wall of Hazlehurst offensive linemen consisting of left tackle Ivan Mazie, left guard Joe Nelson, center Toriaun Samuels, right guard Johnkil Skipper and right tackle Darius Washington.  These five pushed and shoved the Eagle defensive linemen around without mercy, creating gaping holes for Indian backs and providing plenty of time for quarterback Kenneth Coleman to complete 6 of 15 passes for 100 yards.
Indian RB Aaron Larry opened the scoring with a one yard plunge in the second quarter to put Hazlehurst up 6-0.  Cain then broke loose on a 46 yard rumble to increase the lead to 12-0.  Larry added a late second quarter score to put the Indians up 18-0.  The Eagles notched their only score of the evening in the period and added the two-point conversion to trail 18-8 at the half.
The Hazlehurst offense sputtered somewhat in the second half.  In fact, the only score was Cain’s 17 yard interception return for a touchdown in the fourth period.  Coleman found WR Dedric Reese for the two-point conversion to round out the scoring.
Once again, Hazlehurst struggled out of the gate on offense, a thought not lost on head coach Randal Montgomery.  “We have had two consecutive weeks of slow starts, so we need to improve in that area,” Montgomery said Monday.
Special teams, which were such a strong point in the first four games, have also plagued the Indians the last two weeks. “We also need to improve on our special teams play. Hopefully, we have corrected those problems so that we can play a well-rounded football game on Friday against Prentiss,” Montgomery added.
The Bulldogs, 1-5, are not to be overlooked, Montgomery says.  “Prentiss is a team with a few good athletes that we must pay attention to. We need to start fast and finish strong,” he said.  Kickoff for this Reg. 7-3A contest is scheduled for 7:30 in Prentiss