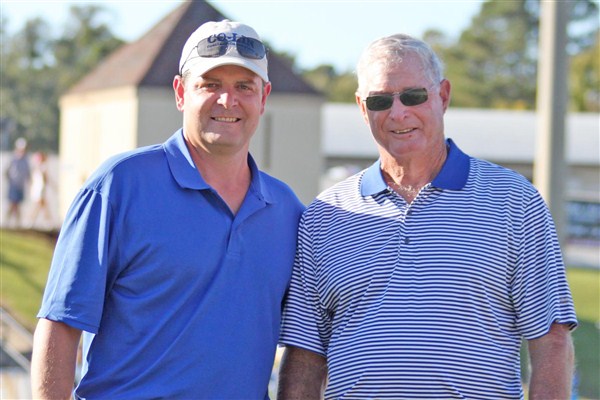 My dad, Ira Coates, known compassionately around here as “Big Ira” or “The Mendenhall Mauler”, was inducted into the Co-Lin Sports Hall of Fame on Saturday.  The ceremony took place at Rea Auditorium that morning, as part of Co-Lin’s Homecoming program.
Dad’s induction comes 52 years after he played football at Co-Lin.  His accomplishments proved it an easy choice.  Dad played in the National Junior College All-Star game in New Mexico in 1959 and was a ‘bruising fullback with natural talent who left cleat marks in the backs of his own offensive linemen if they didn’t get out of they way’, as his presenter, former teammate and long-time friend Curtis McMillian said Saturday.
All of my life I’ve heard the amazing stories (and some tales) from his friends, such as, Pat Hennington, Alton Ricks, Alton Greenlea, Mike Hux, and the myriad students Dad taught and coached for four years at Wesson High School in the late ‘60s–both reasons that many people connect to me and my siblings. “Ira was the meanest, toughest, son-of-a-gun that ever played football,” and “We used to run your Daddy ‘til his tongue dragged the ground, then keep on giving the ball to him,” are some of the more telling statements made by former teammates. “He knew how to get our attention, and he knew how to keep our attention,” said a couple of his students, who required further instruction from Dad after getting into trouble at school–and let’s just leave the details out of it.
Suffice to say, ‘Coach’ as we now call him, thanks to being dubbed that by his first grandson Brody nearly 20 years ago, is well-respected as an awesome athlete and a coach/teacher who loved all of his students and has been loved by them.  Furthermore, people love Coach because of his good-naturedness and the gentle and compassionate way he approaches others.  And, he is very personable.
He certainly had a great time Saturday, and his induction is long overdue.
One little aside about Coach:  Like many adults, he fell flat on his face after he and Mom divorced over 20 years ago.  Dad was scared, though he didn’t show it.  He was alone, but shunned the loneliness.  He was without a full-time job and without much direction.
One day he ran into an old friend, Mike Hux, who took Coach to eat lunch.  Mike knew Coach was down and out, and that Dad also loved coaching.  So, he encouraged Dad to renew his teaching certificate.
Long story short, Dad was eventually hired by Prentiss Christian School to coach high school and junior high football and track and some other things.  Over the years since, PCS won a state A football title in 1993 and later won track titles, plus the junior high football teams were perennial district powerhouses–all this while Dad was coaching.  He retired from coaching some 10 years ago, but has been employed at PCS ever since.  He loves the people there, and they love him.  He, as my 7-year-old Grayson says, is a good community helper.
I tell you this because of the lesson that Coach has taught his five children and 14 grandchildren in all of this:  when you are knocked down, get back up and work harder, put your faith in the Lord, treat people right and in the end you will be rich–rich in the the number of people that love you and in the opportunities you’ll have to serve others.  And, God will bless you beyond all of your expectations.
Yep, that’s my Dad.  That’s Coach.