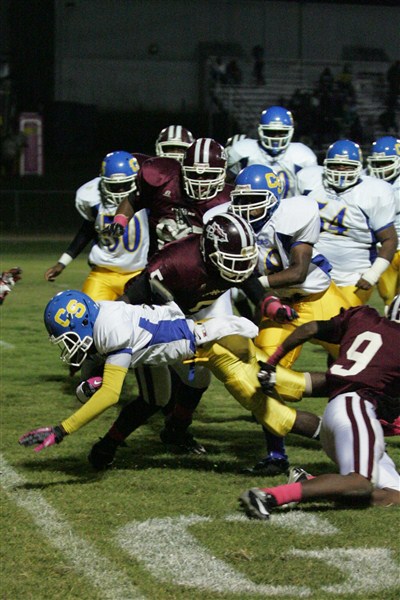 Kenneth Coleman threw for  252 yards and 2 touchdowns, while Demetrius Cain ran for 106, as the homestanding Hazlehurst Indians clipped Crystal Springs 53-44 on Friday night to stay unbeaten.
Hazlehurst led 19-0 after the first quarter on a 2 yard run by Freddie Nelson, a 30 yard pass from Coleman to Cain and a 10 yard run by Coleman, with one PAT being successful.
At the half, the Indians led 32-6.  Cain added his second TD with a 22 yard run.  Then, Coleman hit Dycelious Reese on a 74 yard pass play late in the half.
Crystal Springs won the third and fourth quarters, as the Tigers kept most of their starting 11 in offense against a plethora of substituting Indians.
Crystal Springs scored 16 points in the third.  Hazlehurst got 13 on an 8 yard run by Aaron Larry, and then a 38 yard run by Coleman.
In the fourth, the Tigers added 22 points.  The Indians’ lone score came on an 8 yard run by Malik Brown, who also added the 2 point PAT.
Coleman finished with 4 total touchdowns–2 passing, 2 rushing.  Cain scored  twice.
Larry rushed 6 times for 33 yards and a score.  Brown came in late and ran 8 times for 51 yards and a score.  All told, the Indians racked up 540 total offensive yards.
On defense, the Indians were led by Cain with 9 tackles, John Bridges with 7 tackles and 1 sack. Junior DB Davell Durr collected his first interception during the second half.
“We played well, and played a lot of people,” head coach Randal Montgomery said after the game.
The senior players were honored before the game.  They have been a part of 4 teams who have made post-season play an expectation around town.Their record stands at 41-9 with 3 division titles and a south state 3A championship.
“Cain, Coleman, Skipper and the rest of those guys have made my job much easier.  Not only do they perform on the field, but they also are leaders everywhere else for our underclassmen,” Montgomery said.
Hazlehurst (11-0), the top seed out of Region 7-3A hosts Raleigh (2-7), the four seed out of 6-3A, at 7:00 Friday night.  The winner advances to round 2 to face either SE Lauderdale or Sumrall next Friday.
Posted in Sports