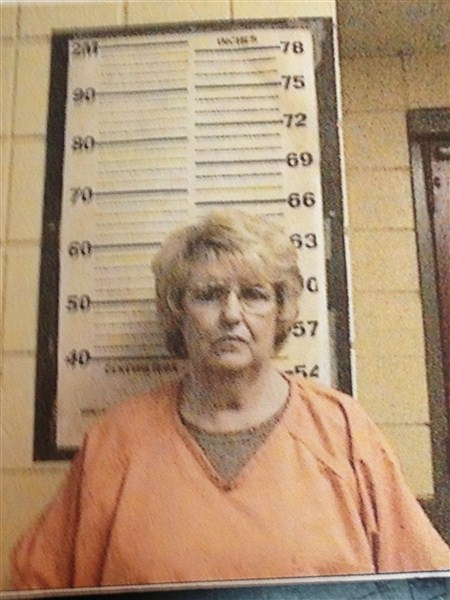 Booking photo of Linda Reed, who had missing since April 27 and who has been charged with embezzling $20,000 from a local business by the Copiah County Sheriff’s Office. (PHOTO COURTESY CCSO)

Copiah County Sheriff Harold Jones announced on Thursday, October 25, that the search for a Linda Gale Reed is over.  Reed had been missing since April 27 when authorities found her car parked on a rural road near Crystal  Springs, Miss.  Her case was upgraded recently from missing person to criminal charges of embezzlement from the Copiah County business where she worked for 20 years.
“We have her in custody in our jail,” Sheriff Jones informed members of the media at a hastily called press conference today at 4:30 p.m.
“Investigator Jeremy Thornton and I left yesterday, Wednesday afternoon, headed to Texas to pick up Ms. Reed. She was living in Longview, Texas and working as a bookkeeper,” explained Sheriff Jones.
According to Sheriff Jones, he and Thornton arrived in Texas late last night.  After staking out Reed’s house last night, Longview Police Officers (LPD) conduct a traffic stop and arrested Reed Thursday. Sheriff Jones identified her for the police. “This successful arrest was a concerted effort between the LPD and the Copiah County Sheriff’s Department.  They did everything they could to assist us.  Within two hours after her arrest,  they had her before a magistrate judge. She waived her right to extradition. We arrived back here around 3:00 p.m.” Sheriff Jones explained.
“She was using her real name, her social security number and was working for another company as a bookkeeper,” stated Sheriff Jones.
Because of the strenuous nature of the trip, they simply booked processed Reed. They have not interviewed Reed for further details about her five months on the run.
Reed’s family would be allowed to visit their mother later Thursday.
“I am just glad that Ms. Reed is alive and not somewhere dead in my county,” concluded Sheriff Jones.
The story is still unfolding. The charge of felony embezzlement is likely to change in the coming days.
Posted in News

Wesson Yard of the Month – September