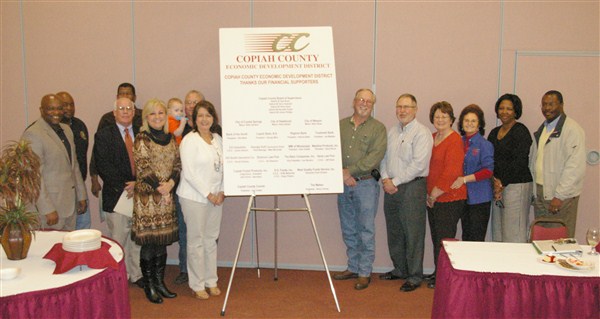 Members of the Executive Board of Copiah County Economic Development District and Copiah Board of Supervisors pose with the new sign that honors the district’s financial partners, during last Wednesday’s meeting of the district’s Board of Trustees.

Draft of new billboard that may soon be placed along I-55 south of Byram.

Motorists on I-55 will soon be getting a new marketing message enticing them to visit Copiah County, as the executive board of Copiah County Economic Development District has approved the purchase of ad space on a new billboard structure just south of Byram.  The decision was announced by district director Arthur Evans, Jr., during Tuesday’s quarterly meeting of the CCEDD Board of Trustees.

“We have been working a new marketing plan, and this is one of the pieces of it,” Evans explained.

Evans updated the members on the progress of a new company moving into the county-owned Unversal building in Gallman.  A sand-fracking company has been installing equipment for a few days and will be operational once several permits from Mississippi Department of Environmental Quality are acquired.  “We’re looking at up to 10 jobs initially being created,” Evans said.  No firm start date has been established, he added.

Evans recognized the contributions made by several public agencies and private businesses during the meeting.  “We appreciate your financial support and would not be able to operate without it,” he said.

A representative of MS Job Corps in Crystal Springs notified the members that the U. S. Department of Labor had put a freeze on new students beginning January 28.

The board approved minutes from the meeting in October and financials from the previous three months, then adjourned until April.