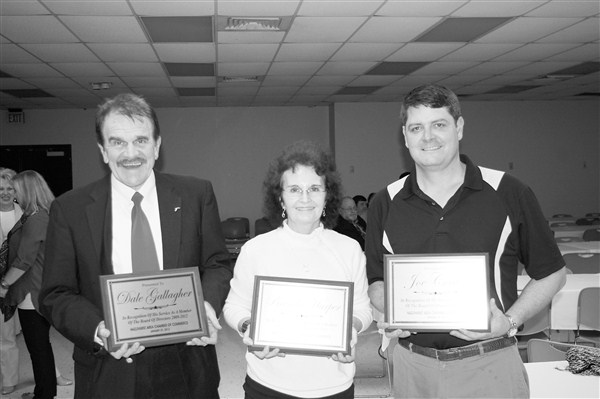 TIME WELL SERVED – Three members of the previous Board of Directors for the Hazlehurst Area Chamber of Commerce were presented plaques for their years of service to the organization. From left are Dale Gallagher, Brenda Harper and Joe B. Coates. Gallagher, who served as Membership Chairman for several years, is credited directly with increasing membership from around 85 members in 2008 to now over 100 members in 2013. Harper served as Secretary for three years, accurately recording meeting mi

Well, I finally made it.  Seven years after beginning a three-year term as a member of the Hazlehurst Area Chamber of Commerce’s Board of Directors, my service is up.  The notice became official at least week’s Membership Banquet, as I took hold of the plaque that notes my service.  But, as publisher of the newspaper, I’m unofficially a part of the board at all times, so . . .
These past seven years have been a good experience for me.  The board members that were serving back in ‘06 were helping the Chamber come out of a 5 year slump that saw membership decline to below 40 for the first time ever.  That board breathed new life into the Chamber and began pecking away at rebuilding the organization member-by-member, event-by-event.  The directors that the membership has elected every year since have continued to rebuild the Chamber, and, now, its stronger than ever with over 100 members, allowing the organization to easier market its members and the community to the region and even the entire world.
I’m proud to have been a part of that rebuilding process.  I’m proud to also have served as president of the board for two years and to have been in a leadership position for the first three Rockin’ Railroad Festivals.  I’m proud to have served with the other board members believed enough to take that initial risk to build the festival.
In place of the four of us that are leaving the board are four more that will all be great assets to the organization and to the remaining board members.
Finally, without the support of my wife, Karen, and the rest of my family, the term would have been much less enjoyable.  So, to you especially, KK, I say “Thanks.”