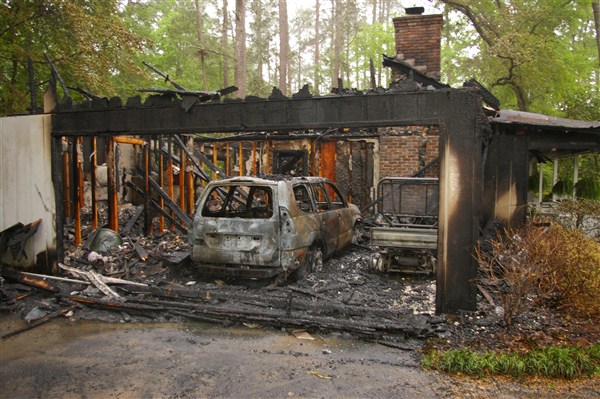 A view from the north side of the Thompson’s home. Fire consumed the structure in the early morning hours, including two vehicles that were left parked in the garage.

An early morning blaze  on Dogwood Drive in Hazlehurst destroyed the home of m Jackie and Nancy Thompson on Monday.  The Thompsons were out of town for the weekend, but a housekeeper who was keeping the Thompson’s two dogs was in the house at the time of the blaze.  Fortunately, a Hazlehurst police officer entered the home and awoke the woman just in time, saving her life and the lives of the animals.
Fire officials would not comment on the cause of the blaze.  The entire home was destroyed.  Only a couple of outer brick walls remained, along with a some of the load-bearing walls in the inside.
Read more in this week’s edition of the Copiah County Courier.
Posted in News