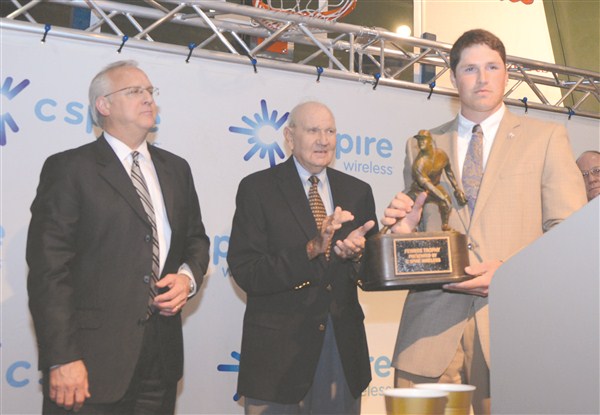 Mississippi State outfielder edges out four other finalists from Ole Miss, Southern Miss and Delta State for award
Jackson, Miss., (May 20, 2013) – Outfielder Hunter Renfroe, Mississippi State’s semifinalist for national college baseball player of the year, won the 2013 C Spire Wireless Ferriss Trophy today as the state’s top college baseball player at a Mississippi Sports Hall of Fame awards luncheon program.
Renfroe, a 6-foot, 1-inch junior outfielder from Crystal Springs, Miss., and Copiah Academy, led the SEC in home runs (15) and slugging percentage (.691) and finished fifth in the league with a .362 batting average and 51 RBIs while leading the Bulldogs to a fifth seed in the opening round of the SEC tournament against Missouri on Tuesday in Hoover, Ala.
Renfroe edged out four other finalists in one of the strongest fields since the award’s inception in 2004.  Other finalists included Ole Miss catcher Stuart Turner, pitcher Bobby Wahl, Southern Miss pitcher Andrew Pierce and Delta State pitcher Josh Branstetter.  Turner finished third in the SEC with a .377 batting average, Wahl was 9-0 with a 1.99 ERA, Pierce was 9-1 with a 2.37 ERA and Branstetter was 9-2 with a 1.68 ERA.
“Thanks to all of my teammates and coaches for helping me win this award,” Renfroe said in accepting the award.  He becomes the fourth Mississippi State player to win the Ferriss Trophy, which is named after Mississippi baseball legend Dave “Boo” Ferriss, who played for Mississippi State and the Boston Red Sox and was the long-time head baseball coach at Delta State.  MSU pitcher Chris Stratton won the award in 2012.
“For its size, Mississippi has some of the best baseball talent in the world and today’s program demonstrated that once again with five strong candidates,” said Jim Richmond, vice president of Corporate Communications for
C Spire Wireless.  “Our best wishes and congratulations go out to all the players, their families, the schools and teams who were honored today.”
The winner and the other finalists were selected by a 24-member panel comprised of the state’s college baseball coaches and Major League baseball scouts whose territory includes Mississippi.
C Spire Wireless also sponsors college football’s Conerly Trophy and college basketball’s Howell and Gillom Trophies, which honor the state’s top football and male and female college basketball players.

About C Spire Wireless
C Spire Wireless is a diversified wireless communications and technology services company passionately committed to helping customers by personalizing wireless services designed just for them.  The company is the first wireless provider in the U.S. to personalize customers’ experience by providing recommendations for apps, music, movies and books that fit who they are, services that anticipate their needs, and rewards for using their phone in new ways – all with seamless ease and at fast 3G and 4G speeds.  For more information about C Spire Wireless and its products and services, visit www.cspire.com or follow us on Facebook at www.facebook.com/cspire, YouTube at www.youtube.com/cspire, Twitter at www.twitter.com/cspire, Google+ or Pinterest at www.pinterest.com/cspirewireless.
Posted in Sports