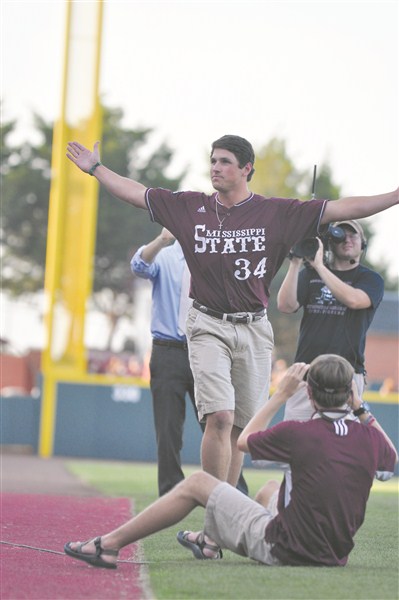 The college baseball season has come to an unwelcome end for fans of Mississippi State Bulldogs.  The team, which includes junior right fielder Hunter Renfroe of Crystal Springs, had reached the championship of the NCAA Men’s College World Series against UCLA on Friday, June 14.  The Bruins swept the first two games of the best-of-three series, winning 3-1 on Monday and 8-0 on Tuesday, to stop the ‘Dogs historic run to a first-ever national championship.
On Thursday evening, a welcome home party was throw at Dudy Noble Field, the on-campus home of the Bulldogs.  Some 3,000 fans showed up to see and hear the players and coaches one more time and to soak in the last ounce what has been the most successful baseball season in the history of the school.
“(I) can’t say ‘thank you’ enough for what all happened to this team,” MSU junior outfielder Hunter Renfroe said told Hailstate.com last week. “This is the closest team I have ever been around. Our fan support is like no other team in the country. We have a lot of special memories. It was an incredible run.”
Renfroe was the rudder that steered the Bulldog ship in 2013.  Most of the season, as Renfroe went, so did the Bulldogs.
In the CWS, Renfroe was 3-for-12 in the first three games–all Bulldog wins–and hit the game-winning 3-run homer in the ‘Dogs win over Oregon State in Game 3.  UCLA’s extraordinary starting pitching shut Renfroe and the team down in both games of the CWS championship, as the star finished 0-7 against the Bruins.
On the season, Renfroe hit .345 with 16 homers (lead the SEC), 16 doubles and 3 triples.  On defense, he finished with 108 put-outs and 8 assists–one of which was last Tuesday, when his incredible throw beat a runner a Bruin runner to third base for an out.
Renfroe, who signed with the San Diego Padres recently, will head out to begin his pro career in a few days, he said Friday.
“This season has been a wild ride, and I certainly will remember all the turns that got us to where we ended up,” he said.
See more CWS photos by clicking here.