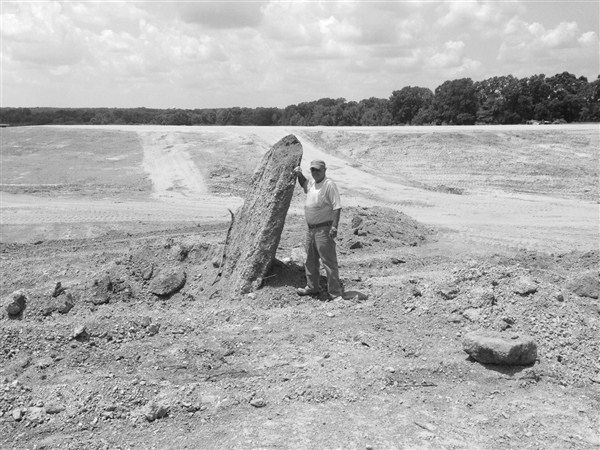 BETWEEN A ROCK AND A HARD PLACE – Laying the new runway at the Copiah County Airport in Gallman involves moving a lot of earth, but the crew hit an unexpected snag when this vein of limestone rock was discovered.

Crews working on the new runway at Copiah County Airport found an unexpected obstacle last week.  It turns out that it will cost around $170,000 to remove it
Mike Corkern, Airport Authority, informed the Copiah County Board of Supervisors that a huge slab of rock, part of a rather lengthy vein of sandstone, had been discovered in the path of the new runway at the airport. A change-order of $169,000 was issued by the Federal Aviation Administration, MDOT and the county to remove the huge rock so that work can continue on the runway.
In a related matter, bids for a new hangar at the airport will be received on Saturday, August 17 at 1:30 at the airport.  The airport received a grant to develop the new hangar, which will improve efficiency at the airport.
Posted in News