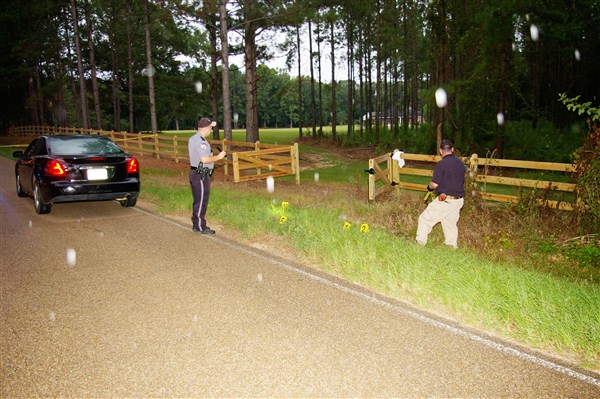 Investigators with Copiah County Sheriff’s Department collect evidence at the scene of a fatal shooting about 4 miles east of Hazlehurst on Monticello Road Tuesday evening.

***BREAKING NEWS: SUSPECT IN MURDER OF NIKISA BENSON HAS BEEN CAPTURED***
Copiah County Sheriff’s Department is reporting that Christopher Michael Smith, the lone suspect in the murder of 38-year-old Nikisa Benson of Monticello last Tuesday has been captured near Meridian, Miss.
Undersheriff Derrick Cubit told Copiah County Courier that an officer with Mississippi Highway Patrol and a U. S. Marshal stopped a vehicle that Smith was believed to be driving and arrested Smith at the scene.  Smith is being transported by to Copiah County for questioning.  Cubit said that his department will charge Smith with Benson’s murder.
________________________________________
Police say that a woman was shot to death on Monticello Road southeast of Hazlehurst this evening.
Copiah County Undersheriff Derrick Cubit said that 38 year-old Nikisa Benson of Lawrence County was driving east on Monticello Road when the driver of another vehicle headed west stopped in front of Benson’s car and began shooting.  Benson was shot through the driver’s side glass, but managed to escape through the passenger door, Cubit said.  The shooter then got out of the vehicle and began shooting at Benson as she attempted to run through  a nearby wooded area.  She fell after running about 30 feet.
Area residents said they heard several gun shots around 5:30 p.m. and described them as sounding like those of an assault weapon. “We were called in around 5:30, with the caller saying they found a body lying in a field,” Cubit said.  Law enforcement officers were called to investigate and found bullet holes in the asphalt and blood on a fence that runs along private property on the road.  Moments later, Benson’s body was discovered,  where she was later pronounced dead by Copiah County deputy coroner Rick Akin.
At least ten large-caliber bullet casings were found near the scene by investigators.  Cubit said that his office has identified a suspect-a black male named Christopher Michael Smith, 38, of Lawrence County-for which they are searching.
“Smith has family in Copiah and Lincoln Counties.  Those that see Smith or are in contact with him in any way need to contact local law enforcement immediately.  Do not approach Smith as we believe he is armed and dangerous,” Cubit explained.  Authorities believe that Smith is driving a black Chevrolet Cavalier with chrome rims.  “We have no tag information currently,” Cubit said.
Copiah County Sheriff’s office can be reached at 601-894-3011.  Crimestoppers’ number is 601-355-TIPS(8477).
Posted in News