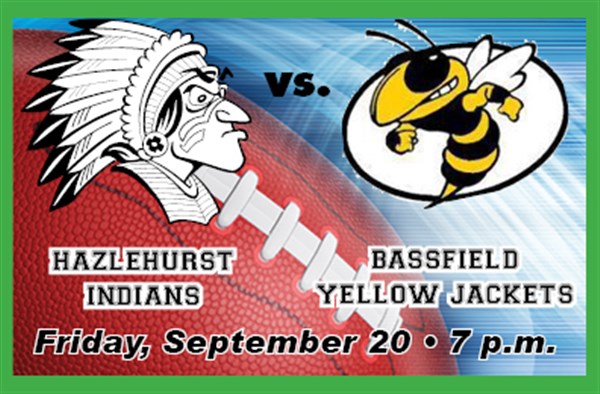 Two undefeated teams play in Bassfield on Friday night.  Both are defending state champs with 20 game win streaks.  Both have strong defenses.  Both can score points quickly and in bunches.  Both have strong, fast, hard-hitting personnel up and down the roster.  Both have head coaches and assistant coaches who have instilled their game in the minds of their players.  And, both believe they will win on Friday night.
Yes, the day that has been circled on many a fan’s calendar since the 2013 football schedules were announced back in the spring is drawing near.  The first four weeks of the season could be considered  a hush-hush period when talking about Hazlehurst vs. Bassfield.  Now, folks can talk about it.
The Indians, 4-0, ranked third in the state 3A division, will face the Yellow Jackets, 4-0, and top-ranked in 2A.  Some have been calling it the ‘Game of the Decade’ around both communities.  One thing’s for sure, it only counts as one game and will not affect the playoff picture one red cent.
Hazlehurst is fresh off a 14-0 homecoming win over highly-ranked 2A East Marion on Friday night.  Bassfield handled 4A Collins 26-12.
The Yellow Jackets like to run the ball.  They are led by junior running back Todrick Daniels who has 301 yards on 53 carries.  He has scored 6 touchdowns.  His teammate Greg Green, also a junior, has carried 50 times for 269 yards and has scored 3 TD’s.
In the passing game senior QB Calvin Moore is 13-of-22 for 225 yards, one TD and three interceptions.
On defense, senior LB Alvin Moore has 27 tackles, including 5 for loss.  Sophomore DE Racheem Boothe has 26 tackles and 2 for loss.
The Yellow Jacket kicking game is solid with 20 of 21 extra points made and is  2-of-2 on field goals.
Hazlehurst runs a more balanced offense.  The passing game is led by senior QB Jarvis Warner who has thrown for 9 TD’s and 176 yards per game.
The Indian ground game is anchored by senior RB D’Alex Rockingham who has 407 yards on 56 carries and has scored 3 TD’s.  Warner is the team’s second leading rusher with 247 yards on 31 carries.
Senior wideout Dycelious Reese is Warner’s main deep-ball threat.  Dycelious has 8 receptions for 188 yards and 3 TD’s.  Sophomore RB Ladarrious Williams has 12 catches to lead the team for 106 yards.  Senior WR John Bridges has also caught 3 TD passes.
On defense, big Johnkil Skipper, the senior nose tackle, leads the Indians with 26 tackles, including 3 for loss.  Cornerback Demarion Wilson has 23 tackles.  Sophomore DB Anfernee Jordan leads the team with 3 interceptions.  Senior nosetackle Jarvarious Tanner leads the team with 4 tackles for loss.
In the kicking game, Dycelious Reese is 4-of-6 on PAT’s and has no field goal attempts thus far.
The Indians average 27 points per game.  The Yellow Jackets are averaging 38.5.

Fans can expect a well-played, exciting football game between these two schools on Friday night.  Good sportsmanship will be expected from students, athletes and fans of both schools, no matter who wins.  Bassfield High School is located on Hwy. 35 about 10 miles south of Prentiss, Miss., off of Highway 42 East.  Those who plan to attend from the area are encouraged to arrive early.  Fans may want to bring lawn chairs as stadium seating is limited.