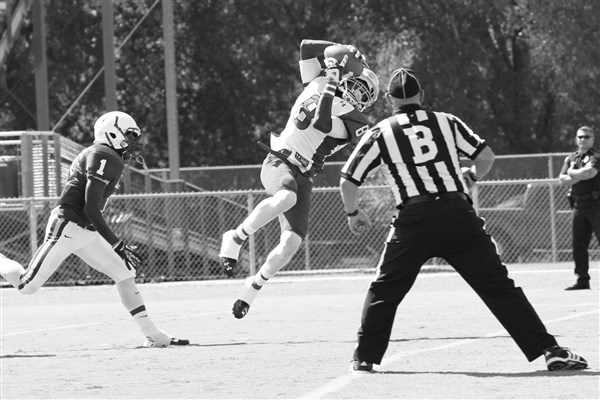 ELLISVILLE – The Jones County Junior College Bobcats (5-0, 3-0) were able to run their two minute drill to perfection on Saturday afternoon against the Copiah-LincolnWolfapck (4-1, 2-1). The No. 9 Bobcats got a 2-yard rushing touchdown from Ra’Quazious Boyd with 17 seconds remaining in the game to give them a 50-47 win over the No. 4 ranked Wolfpack.

Co-Lin kicked off to Jones with 2:27 remaining in the game after taking the lead in exciting fashion. Facing a 4th and 10 from midfield, Co-Lin quarterback Daniel Fitzwater hit wide receiver Casey Gladney for a 45-yard touchdown pass. Gladney was able to out sprint the Jones defense to a ball that appeared to be sailing over his head and made the spectacular one handed catch in stride.  Blayne Jones was good on the point after kick and Co-Lin led 47-43. Gladney, a University of Cincinnati commit, had a monster day catching the football, finishing with 10 catches for 168 yards and 4 touchdowns.