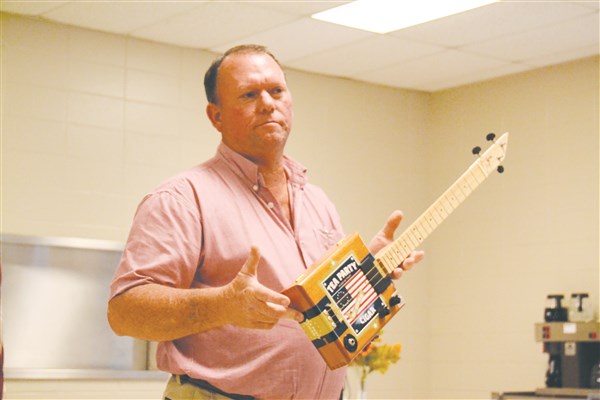 by Anna Coates
The Institute for Learning in Retirement (ILR), a group of senior adults who meet regularly  for social events, membership meetings, luncheon lectures, seminars, and field trips, had as its October guest, Roger Berry, of Mississippi Blues Guitars, LLC.

Roger is a commercial electrician with a hobby of custom building Cigar Box Guitars.  Roger’s hobby of creating custom guitars of all types has morphed into a focus on creating the three-string, open tuning guitar made from a cigar box, which he has decorated with various motifs. However, as he worked with this craft, he has branched out into making these guitars out of just about anything handy.

He demonstrated a guitar made from an ordinary shovel, which, with a pick-up (sound component) sounded amazing.  He also demonstrated a one-stringed instrument called the “diddly-bow.” (Anyone want to hazard a guess as to where Bo-Diddley got his name?) They were played with a neck cut from a Coke bottle or rum bottle – the slide – run up and down the string until the desired tone was located.

Son House, Robert Johnson, Muddy Waters, and other bluesmen were highly influenced by these slide instruments, and they in turn influenced later musicians, including Eric Clapton.
Beginning in 1840 cigars began to be shipped in smaller wooden boxes which were often discarded by shopkeepers. After the Civil War, impoverished ex-slaves and sharecroppers alike seized upon the boxes to fashion the crude instrument. B. B. King’s father, after realizing he couldn’t afford $2 for a store-bought guitar, made his son’s first guitar from a cigar box.

Roger’s guitars are anything but crude, sporting art on the outside and technology on the inside.  They are easy to learn to play, so it is said.  Roger may be reached at email (rogerb959@gmail.com) or “like” him on Facebook at www.facebook.com/MississippiBluesGuitars. His workshop and guitar display is open to visitors by appointment.