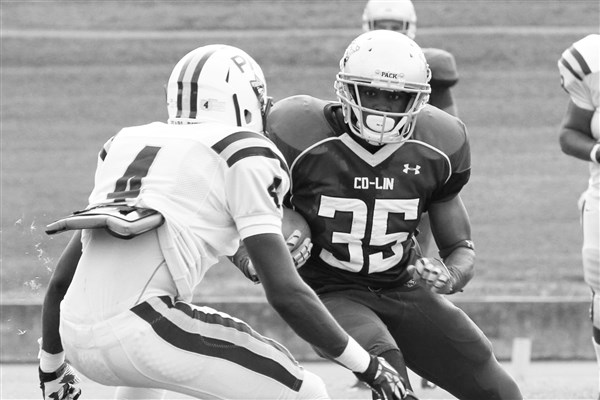 DODGING – Co-Lin running back Kelton Smith (35) gets away from Pearl River’s Shauntez Ball (4).

WESSON – Wild. That’s about the only way to sum up the first half of the game between No. 7 Copiah-Lincoln (6-1, 3-1) and Pearl River (3-4, 1-3) on Saturday afternoon in Wesson. Three long scoring play by the Wildcat defense and special teams had the Wolfpack fighting from behind from the opening whistle. The gaffes and miscues were kept to a minimum in the second half and that was enough for Co-Lin to hold on to a 37-27 victory on homecoming Saturday.

The start was disastrous for Co-Lin as kick returner Courtney Foy fumbled the ball on a jarring hit from the Pearl River kick coverage team. The ball popped straight into the air where it was plucked and returned for 12 yards and a touchdown by Pearl River’s Taron Divens. The Brandon King point after attempt was good and just nine seconds into the game the Wildcats held a 7-0 lead.

Co-Lin would respond on their next drive by using some trickery to get into the end zone for the first time. The Wolfpack ran a reverse that looked like it was setting up a halfback throw, but that turned into a flea-flicker, which quarterback Daniel Fitzwater chunked 36-yards down field for a touchdown to a waiting Casey Gladney. The Blayne Jones point after attempt was good and with 11:17 left in the first quarter the Wolfpack had tied the game at 7-7.

That lead lasted exactly 16 seconds as Wildcat kick-returner Charles Ducksworth flew by the Co-Lin coverage team in route to a 98-yard touchdown return. King nailed his point after attempt and Co-Lin trailed again, 14-7.