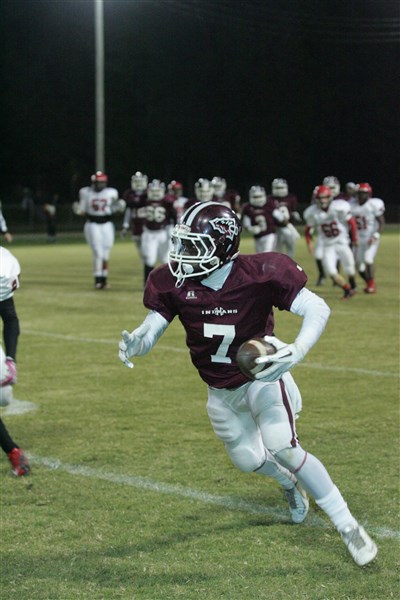 Dycelious Reese turns upfield on his way to a touchdown.(Crockett Action Shots)

Hazlehurst Indian football got off to a solid start in the 3A playoffs with a convincing 41-6 win over the West Marion Trojans last Friday night.

The Indians fell behind early, as the Trojans put the first points on the board in the first minute of the game.  After taking the opening kickoff out to their own 23, the visitors used two plays to find the end zone. Trojan quarterback Miller kept for a gain inside the Indian 5 yard line, then scrambled for a four yard score one play later.  The PAT was blocked for a 6-0 Trojan lead.
Hazlehurst then exploded for the game’s final 41 points, starting with senior running back Malik Brown’s 4 yard touchdown run late in the first quarter.

Senior quarterback Jarvis Warner continued the onslaught with a  20 yard TD pass to Dedric Reese early in the second.  The Indians scored again on Dycelious Reese’s 26 yard run moments later.  Senior running back D’Alex Rockingham added a late touchdown before halftime to give Hazlehurst a 27-6 lead at the break.

Dy. Reese caught a Warner aerial to start the scoring in the third period.  Warner then hit LaDarrius Williams towards the end of the period for another scoring strike to increase the lead to 41-6.

The fourth quarter was scoreless, as both squads substituted heavily.

“We didn’t play as well as we wanted to open up, but we got better as the game progressed,” said Indian head coach Randal Montgomery.