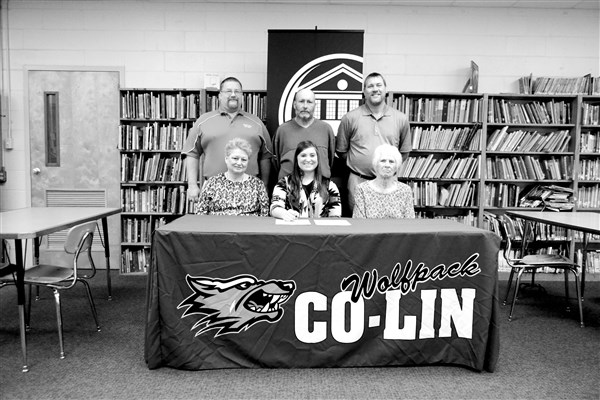 Terry Bauer, head coach of the 3 time defending state champion fastpitch softball squad at Copiah Academy, announced Friday the signing of senior pitcher/third baseman Kaitlyn Taylor with the Co-Lin Lady Wolfpack.
‘KT’, as everyone calls her, has started for Bauer ever since she was in seventh grade.  As a pitcher in 2013, she put together an impressive 20 win campaign.  In a little over 129 innings, she struck out 78 and allowed only 108 hits and 52 earned runs.  Her earned run average came in at 2.81.
KT threw 4 one-hitters, including a shutout against Magnolia Heights in the Lady Colonels’ 4-2 win in the state AAA tournament.
As much as she was a terror on the mound for opposing hitters, KT struck that same fear as a hitter into opposing pitchers.  She batted .393 with 8 home runs, 17 doubles and a triple.  She scored 39 runs and was responsible for 51 runs batted in.  Her .777 slugging percentage ranked her among the top in MAIS AAA.
Against Simpson Academy on September 7 of last year, KT was 3-for-3 with 3 doubles and 3 RBI’s to help her team to a 6-2 win.
“KT is one of the best student leaders we’ve ever had here at the school – on the field and off.  She’s just a joy to be around,” Bauer said.
Co-Lin will also play her at third and pitcher, Bauer said.
Taylor is the 13th college signee in Bauer’s 15 years as fastpitch coach at the school.  The Lady Colonels have won 4 state titles–2005, 2011, 2012 and 2013–in Bauer’s tenure.
Taylor is the only senior on the 2013 squad, which is laden with talented juniors.  “We’ll have 8 returning starters when we come to camp in July,” Bauer added.
Bauer, with help from Taylor and other talented players like her, has instilled a championship attitude in fastpitch at the school.  Without a doubt the Lady Colonels will be the Class AAA favorites when the season starts in late July.
Posted in Sports