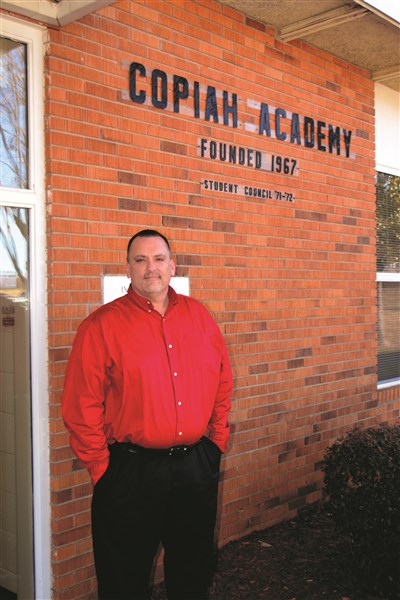 Paul Hayles will be Copiah Academy’s next headmaster.

When the 2014-15 school year starts for students at Copiah Academy, they will have a new leader at the top for the first time in 20 years.
Paul Hayles, who has served in Mississippi Association of Independent Schools for the past 19 years, has been appointed to headmaster at the school and will take over in July. The announcement was made at last Tuesday’s Executive Board Meeting at the school.  Current headmaster Carol S. Rigby is retiring at the end of this school year, thus creating the vacancy.
Hayles, currently the headmaster at Amite School Center in Liberty,  is a 1989 graduate of Adams County Christian School in Natchez.  He played football and participated in track at Co-Lin after graduating from ACCS, then went on to Delta State.  As a Statesman, he played football and earned his undergraduate degrees in Computer Software and Business Management.
He went on to earn a Masters in Education from Delta State and began a coaching career shortly after, serving at Deer Creek School, Trinity Episcopal, Wilkinson County Christian Academy and Adams County Christian School.
Hayles  has been named Coach of the Year four times at the district level in football and served as the defensive coordinator for 2010 South All-Star football team.  He has won many district titles, along with North State and South State titles in basketball.  Additionally, Hayles has excelled as a track and field coach, winning two state titles and earning the MAIS 2003-2004 Coach of the Year in the sport.
Hayles is married to Meredith Hayles of Roxie, Mississippi.  Meredith serves as a Family Nurse Practioner for the Family Medical Group Clinic of Franklin County.  They just enjoyed their nineteenth anniversary of marriage on Jan. 7th.  They are blessed with three sons; Braxton who is currently in the 9th grade, Dalton who is currently in the 7th grade; and, Triston who is currently in the 5th grade.  The Hayles family attends church at first Baptist of Bude, Mississippi and serves as a Deacon to the Church.
A more complete introduction will be published at a later date.