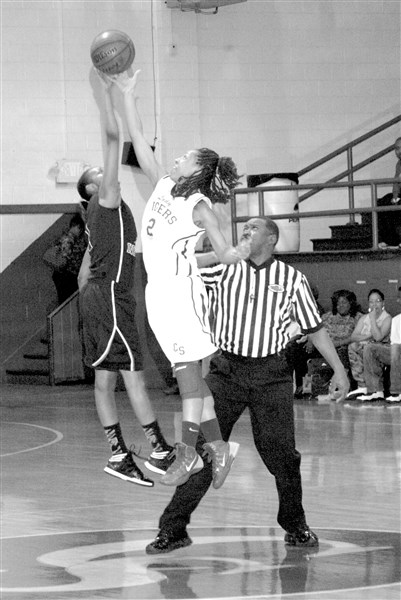 IT WAS THAT CLOSE – The south state girls championship game played last Saturday at Crystal Springs between Hazlehurst and Crystal Springs was won by the Tigers by one point, 34-33. The margin was as slim as the winner of the opening tip (CS) in this photo.

The Hazlehurst Lady Indians have reserved their place in the Mississippi Coliseum to compete for the state 3A championship.  By virtue of their second place finish in the south state 3A tournament at Crystal Springs last week, the Lady Indians (10-17) will come into the ‘Big House’ as the No. 2 seed from the south and will play North state No. 1 Belmont (21-11) at 6:30 on Saturday night.

Hazlehurst knocked off Velma Jackson in the first game 41-39. The Indians’ Nicole Smith scored all 8 of her team’s points in leading HHS to an 8-7 lead after one period.
By halftime, the Lady Falcons found their scoring hand and led 18-13.
The Indians came out after halftime on a mission to win, scoring 18 points and allowing only 12.  The Lady Indians played much better and took a 31-30 lead going into the fourth quarter.
The two teams battled back-and-forth in the final frame, but Hazlehurst outscored the Falcons 10-9 to claim the win.
Smith led Hazlehurst with 14, followed by Roddreka Adams’ 13.

On Friday night the Lady Indians faced the Morton Panthers for the second meeting this season. Morton won the first meeting in Morton. Both teams were playing for a birth in the South State Championship game and a ticket to the Mississippi State Coliseum.
Again, the Lady Indians came out a little slow to start this game scoring only 11 points to Morton’s 18 points. The Lady Indians could not stop their opponent’s guards from controlling the game.
By halftime, Morton had taken a 29-23 lead.  The Lady Indians played better in the quarter, but had little success scoring buckets.
By the end of the exciting third quarter, the Lady Indians were only down by 1 at 37-36.
The fourth period was dominated by Hazlehurst’s Davis, who scored 8  of her team’s 11 points in  the 48-44 win.
Davis led Hazlehurst with 17, followed by Latasha Arnold with 12.

The Lady Tigers and Lady Indians faced off for the first time ever in the South State title game.  A packed house in the Tigers’ gym went away content that each fan had gotten his money’s worth in the one-point Lady Tiger win.
The Lady Tigers had knocked off Forest and Collins earlier in the tournament to reach the finals.
Crystal Springs controlled the tip and controlled a low scoring first period of play. At the end of one, the Lady Tigers led 9-4.  Adams scored all of Hazlehurst’s points, while Byther paced the Lady Tigers with 3.
In the second period the Lady Indians came alive playing solid defense  and holding the Region 7-3A champs to only 4 points.  The Lady Indian offense, meanwhile, accumulated 12 points and put HHS up 16-13 at halftime.

HISTORY IN THE MAKING

Both teams battled ferociously in the third quarter.  When the dust was settled on the period, the teams were right back where they started, tied at 25.
The Lady Tigers proved to be just a little better in the final period, outscoring the Lady Indians 9-8 to claim the 34-33 win and the south state title.
Adams (16) and Davis (10) led the Lady Indians.  The Lady Tigers were led by Byther with 13 and Jackson with 10.
Both teams advanced to the MS State Coliseum to take on the 1 and 2 seeds of the North in 3A.   The Lady Tigers will play North No. 2 Booneville at 1:00 p.m. on Saturday.  The Lady Indians will play at 6:30 Saturday night against North No. 1 Belmont.  Tickets are $10.00 for each game. Come out and support both teams as this is the first time for Copiah County to have two girls teams competing for a chance to play for the 3A State Championship!