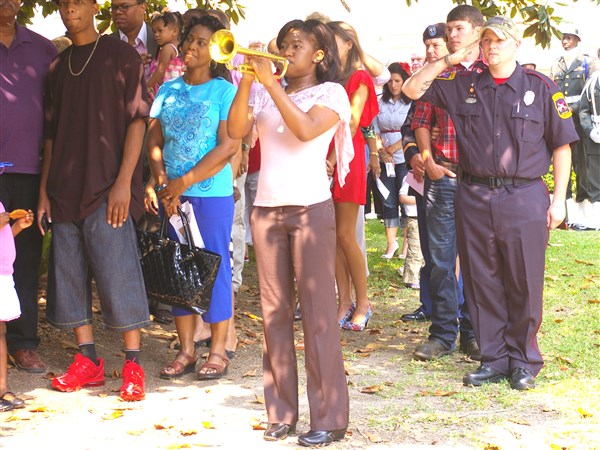 Twyla Jefferson of Hazlehurst performs Taps at the conclusion of Monday’s Memorial Day ceremony on the square of the Courthouse in downtown Hazlehurst.

The annual Memorial Day ceremony were held May 26 in the Copiah County Courthouse for the 153 county citizens whose names appear on the monument on the courthouse lawn as having made the ultimate sacrifice for this nation’s freedom. The event is sponsored by the Hazlehurst Area Chamber of Commerce. Guy Young, Chamber of Commerce President acted as master of ceremonies.
Colors were presented by the Hazlehurst High School Junior ROTC and Pledge of Allegiance was led by Judith Brewer, Regent of the Cherokee Rose Chapter of the DAR. Renee Berry led the Star Spangled Banner and Rev. Jack Holmes led the Invocation and Benediction. Lt. Col. (Retired) Dale Beasley presented the address, utilizing President Abraham Lincoln’s Gettysburg  Address as the centerpiece for his remarks.

At the close of the program, the Hazlehurst Police Department placed the wreath of remembrance and Hazlehurst native Twylah Jefferson presented Taps.

Wesson Founders Day to be held May 1