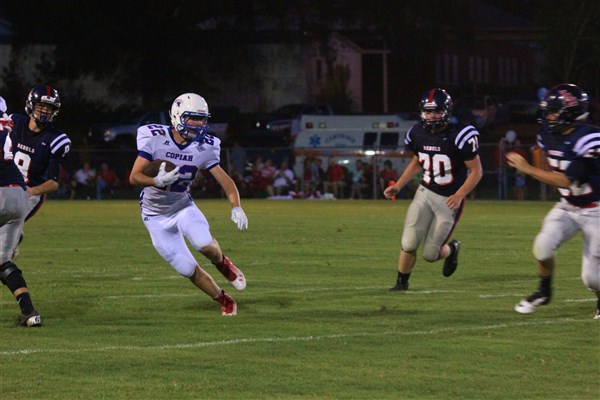 BIG GAINER – Copiah’s Landon Murphy finds himself all alone and picks up good yardage on this play against Leake Academy on Friday night. (Photo by Renee Boone

Copiah Academy won the first game of 2014–and gave new head coach Paul Anderson his first win at the school – over Leake Academy on Friday night.  The Colonels trailed most of the game after giving up two early scores to the Rebels, but a strong fourth quarter sealed the win.

The combination of high heat and humidity level was a concern for both sidelines before and during the contest.  Game officials managed the situation as best they could, calling several officials’ times out to give the players a chance to rehydrate at regular intervals.  Cramps eventually caught up with players from both teams late in the game, but further serious heat-related affects were avoided.