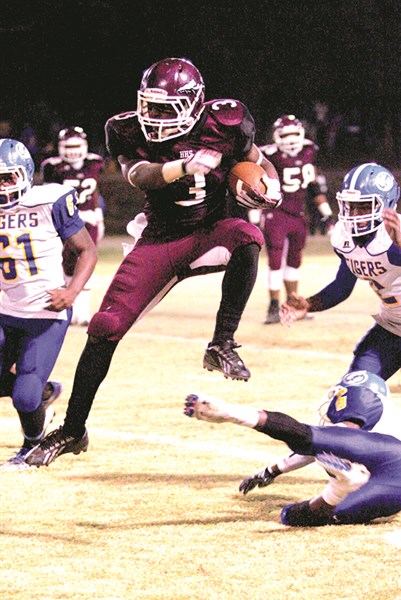 RIGHT OVER – Indian running back Damriun Wilson (3) leaps over a Tiger defender on a scoring run in Friday’s action at McDaniel Stadium. Hazlehurst defeated the Tigers 38-22. (Photo by Crockett Action Shots)

Crystal Springs lost their last game of the 2014 football season in Hazlehurst 38 – 24 last Friday night. The loss left the Tigers record at 2 – 9, while the Indians ended their regular season at 5 – 6 and host Raleigh (5 – 5) in a first round playoff matchup this Friday night.
While their won-lost record might not have been what they wanted, the Tigers were more competitive than in recent years. Close game after close game, a play or two, a break or two, or a mistake or two left them just short of a win.