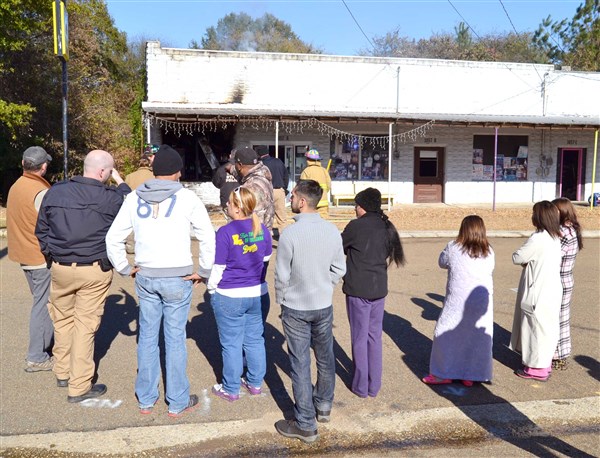 The owner of Wesson Discount Package Store and employees of the business gather together with a Wesson police officer to understand the extent of the damage during Tuesday’s fire. Wesson is temporarily without a package store for the first time in decades.

Several agencies are investigating a fire that damaged a business in Wesson on Tuesday afternoon.  The blaze at Wesson Discount Package Store, 1057A Factory Street, was reported to 911 Emergency Response around 1:15.  Volunteer fire fighters from Wesson responded immediately to douse the fire.  Bethel, Hazlehurst and Strong Hope volunteer fire departments assisted, as well, providing man power and water.
“No one was injured, and no fire fighters were hurt,” said Randle Drane, Director of Copiah County’s Emergency Management Agency.
Drane said that the fire was ignited inside a wall because of an electrical issue, although his agency is still investigating the cause.
Only about 10% of the business, which lies on the west side of a building that once held several businesses, was damaged, Drane said.  Some of the product was destroyed by the fire.  Agents from Mississippi’s Alcoholic Beverage Control and from Alcohol, Tobacco and Firearms monitored and secured the remaining product.
Other agencies that assisted included Copiah County Sheriff’s Office and Wesson Police Department.
Posted in News