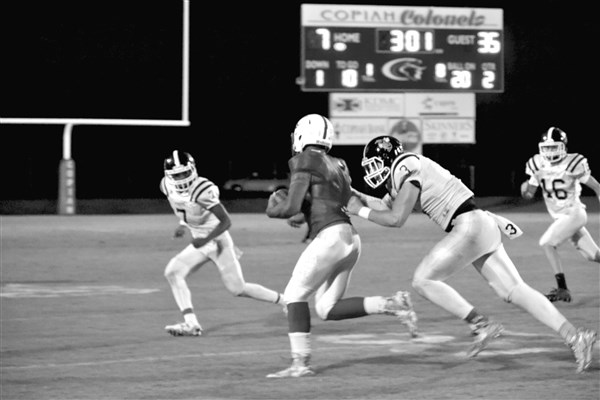 CAN’T SLIP AWAY – Copiah quarterback Jay Holloway (9) is pulled back by an Oak Forest defender after a short gain on Friday night. The Yellow Jacket defense kept Colonel ball carriers from getting to the edge most of the night, forcing Holloway to pass more than in the past three games. The Colonels travel to Madden, Miss., to face Leake Academy on Friday.

The Oak Forest Yellow Jackets rolled into Gallman on Friday night for a much anticipated division matchup with the Copiah Academy Colonels.  Some two-and-a-half hours after kickoff, the visitors left Colonel Stadium with a convincing 42-20 win.

Oak Forest dominated the ground game, running for 280 yards on 50 attempts.  Conversely, Copiah’s usually dominating rushing game was thwarted by the Yellow Jacket defense, with only 54 yards gained on the ground.