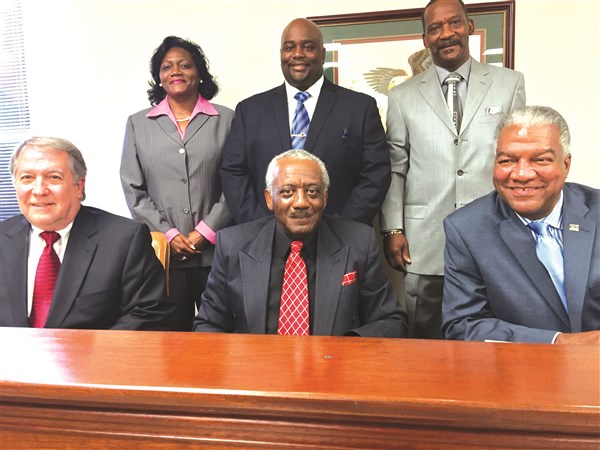 FOND GOODBYE – Current Ward 4 alderman Daryl McMillian (standing center) served his last meeting in the post last Tuesday night at the monthly meeting of the administration of the City of Hazlehurst. He will be sworn in as the new District 1 Supervisor for Copiah County in January. Seated are Rick Akin (Ward 5), Mayor Henry Banks and Ron Sims (Ward 2); standing are Shirley Sandifer (Ward 3), McMillian and Frank Jones (Ward 1).

Mayor Henry Banks and Aldermen Shirley Sandifer, Frank Jones,  Ricky Akin, Daryl McMillian, and Ron Sims were present for the regular monthly City Board meeting on December 1.  Daryl McMillian noted that this was his last meeting as an Alderman, as he was elected to the Board of Supervisors representing District 1.

“I look forward to working with this Board in my new position.  Many of my constituents reside in my new District, so I will still be looking out for their interests.  It’s been a pleasure to work with all of you,” McMillian said before the meeting agenda was addressed.