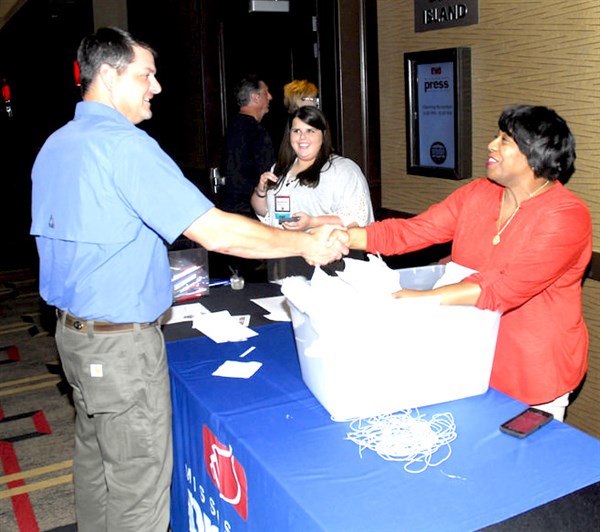 Joe Coates, publisher of the Copiah County Courier, is greeted by Mississippi Press Association’s Andrea Ross at the 150th annual convention of the organization in Biloxi on June 23.

Last week I was fortunate enough to attend the 150th convention of the Mississippi Press Association in Biloxi at the lovely Golden Nugget Hotel and Casino.  The accommodations were very nice.  We don’t gamble (much), so we were very glad that the swimming pool area had plenty of free spaces in the sunshine to stretch out on the ‘free from seminars’ Friday afternoon.  And, the restaurants, a new one of which seem to be around every corner of the resort, were pretty good, too.

The annual summer convention of the association–which is the third oldest in the state, by the way–focuses on the editorial, rather than the advertising or sales, side of the business.  The sales side has a mid-winter convention, usually in Jackson, and two different groups of newspaper folks, more or less, attend the two conventions.  I do find myself with a handful of other small town publishers  each year who are able to attend both.  Getting away to talk shop with others in your field and in a ‘neutral’ setting allows for the batteries to recharge and to bring back new ideas.

MPA works diligently and tirelessly to promote its members and newspapers in general.  The organization’s executive director, Layne Bruce, announced the results of a survey conducted by Pulse Research earlier this year that proves again that newspapers–specifically community newspapers in Mississippi–aren’t dead, nor dying: Mississippi newspapers and websites reach 75% of households in the state everyday.  So, of the 12,139 in Copiah County (according to US Census), our two weekly newspapers are reaching around 9,100 homes each time the papers are delivered.

That’s powerful.  That’s print. And, you still can’t beat it.