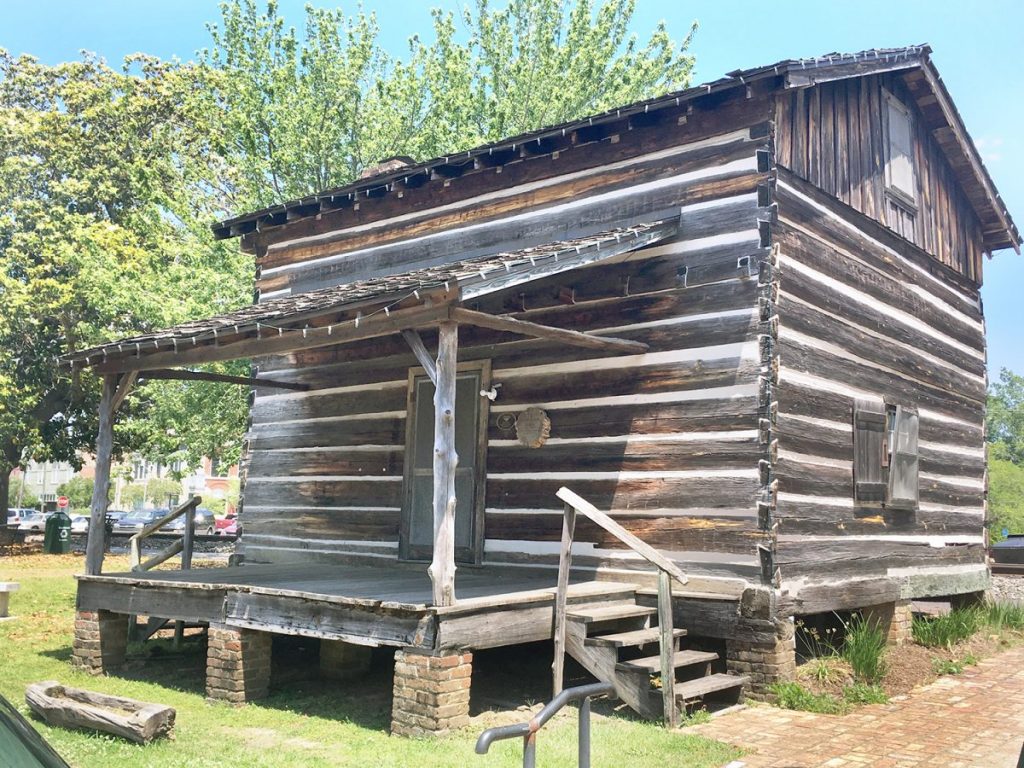 The Foster log cabin in downtown Brookhaven is the oldest, completely-preserved building from Copiah County. Built by John Foster in 1825, it was saved by Andrew and Monelle Smith in 1955, when it was purchased from E. D. Waldrop and moved to Brookhaven.

By Tricia Nelson
John Foster, who was born in Charlottesville, Va., in 1789, moved his wife, Mary Cole, and children, along with his brother, Isaac, and his wife, Nancy Cole, from Union County, S.C., to the Mississippi Territory in 1816, settling in Columbia. John’s third child, James, was born shortly before Mississippi became a state in 1817. Copiah County was in its infancy in 1824 when Foster moved his family to what would have been wilderness, along a dirt road known as Rockport Road, now Beauregard Road near Wesson.
In 1825, Foster built a cabin from virgin long-leaf yellow pine, the sap being hewn off, leaving only the heart of the tree. He was a cotton farmer, working the fields and transporting cotton by oxen to Natchez long before the railroad entered the county in 1858.
John and Mary had 13 children, some of whom eventually migrated to Jefferson and Lincoln counties, and Pollack, La. The Fosters were members of the Little Bahala Baptist Church. It is believed that John Foster is buried in an unmarked grave in the church cemetery.
The little log cabin, now almost 200 years old and possibly the oldest extant structure from Copiah County, was saved in 1955 when Andrew G. Smith and his wife, Monelle, avid historians, bought the cabin from E. D. Waldrop and had it moved to their property in Brookhaven. The logs were numbered, dismantled, and then hauled by truck to Brookhaven, where it was rebuilt exactly as it was found, with only one log having to be replaced.
Monelle Smith passed away in 1994 and in 1997, the cabin was deeded to the Brookhaven Trust and moved to Railroad Park on South Whitworth Avenue, across from the Chamber of Commerce. Although it would be more fitting to be in Copiah County, it is in a historic district where it is treasured by the city and will be permanently maintained.