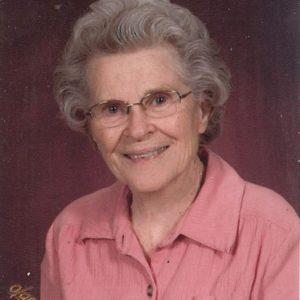 Willie Dean Sojourner Brister, 92, of Terry, passed peacefully in her sleep on Friday, June 26, 2020. Private graveside services will be held at Lakewood Memorial Park in Jackson. Chancellor Funeral Home is handling arrangements.
Willie Dean was born September 18, 1927, in the Palestine community in Simpson County, to Dewey and Ruth Hemphill Sojourner. A long-time resident of Terry, she graduated from Terry Consolidated School and Hinds Jr. College. Upon graduation, she was employed by Mississippi State Rating Bureau in Jackson.
On September 18, 1947, Willie Dean was married to Freddie Brister, of Terry, who was recently discharged from the Navy. In the early years of marriage, Freddie entered the ministry and was ordained on April 21, 1949. Willie Dean accompanied her husband for 11 years when he pastored Baptist churches in Mississippi and Louisiana.
Following Freddie’s death in September 1958, Willie Dean moved to Terry, where she resided until her death. For several years, she attended the Sanctified Church of Christ, where she was the church pianist. She later became a member of First Baptist Church of Terry and served as a church secretary and taught Sunday school.
Willie Dean retired from public works in December 1990 after a combined service of 29 years with the Terry Headlight and the Meteor newspapers.
She was preceded in death by her parents; her husband, Freddie Brister Sr.; her daughter, Denise; and her brother, Quinton “Bud” Sojourner.
Survivors include her son, Freddie Jr. (Carolyn), of Terry; grandson, Clay (Kristy), of Terry; granddaughter, Molly (Bobby) Moss, of Brandon; three great-grandchildren, Gavin Moss and Noah and Karlee Brister; and sister-in-law, Virginia Sojourner.
In lieu of flowers, the family requests that donations be made in her memory to FBC, Terry New Transportation Fund, or Mississippi Toughest Kids Foundation at PO Box 520, Crystal Springs, MS 39059.