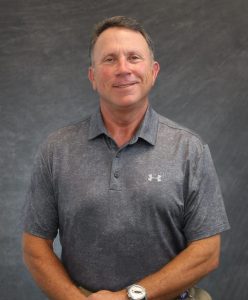 Allen Kent, a Brookhaven native and long-time Co-Lin employee, has been named as the college’s eighth head men’s golf coach.
Kent has served in numerous roles on campus but most notably, he was the head softball coach for 16 seasons from 2003 to 2018. On the diamond, Kent had an illustrious tenure where he led the Lady Wolves to a 392-242 overall record, three MACJC State Championships (2006, 2008, 2009), two NJCAA Region XXIII Championships (2006, 2008), and two top-three NJCAA National Tournament finishes (third in 2006, second in 2008). He was also voted MACJC and MAC Coach of the Year on three occasions and has received NJCAA Region XXIII Coach of the Year honors twice.
“This will definitely be a change from coaching softball,” said Kent. “There aren’t nearly as many players on the team, and there aren’t tournaments, clinics, and showcases that go on year-round, but I’ve got a competitive nature and love teaching and coaching. I have a strong desire to win and to get the most out of each of our players.”
Kent is no stranger to the game, as he has played golf recreationally for nearly 25 years and frequently competes in events at Co-Lin’s on-campus 18-hole course, Wolf Hollow.
“I’m very grateful for this opportunity, and I’m looking forward to building on the tradition of our golf program,” said Kent. “We are very fortunate to have Wolf Hollow here on campus, and it should continue to be a great recruiting tool, along with our residence halls.”
The Co-Lin golf team has a storied history of being a leader in the MACJC and NJCAA with student-athletes regularly participating in the NJCAA DII National Tournament held each year. With the cancellation of the spring portion of the 2019-2020 season, golfers are ready to hit the links in the fall to tee off the next season.
“I’m anxious to learn the ropes of our league, polish up on the rules, and get on the recruiting trail,” said Kent. “We are still looking for a couple of spots to round out our roster, but I’m ready for the challenge.”
Kent is a 1982 graduate of Brookhaven High School and a 1984 graduate of Copiah-Lincoln Community College, where he was a two-year starter for the Wolf Pack baseball team. He graduated from Mississippi State University and is a member of First Baptist Church in Brookhaven. He also serves as the college’s director of housing and the Student Government Association advisor. He and his wife, Wanda, have one son, Colby, and a daughter-in-law, Erica Kent.
Anyone interested in more information about joining the Co-Lin golf team can reach coach Kent directly at allen.kent@colin.edu.