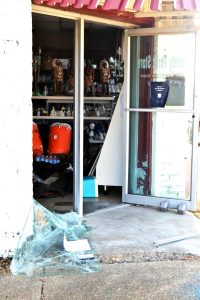 Burglars went in through the side window at Variety Thrift Store on Georgetown Street in Hazlehurst and exited through the front door, according to John Sanders, owner, who said they made away with merchandise and destroyed the office. A hammer, allegedly used in the break-in, was found on the windowsill, and a bottle of lighter fluid with wick was found at the front door. According to Hazlehurst Police Chief Darian Murray, the break-in occurred at approximately 2 a.m. July 31. Murray said the thieves allegedly took Dewalt tools from the store, and the front door glass was broken with a dumbbell. The investigation continues and Murray asks that anyone with information contact the police department.