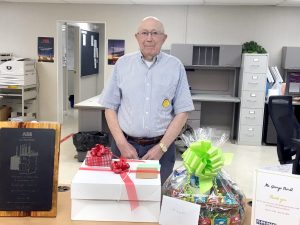 Crystal Spring’s George Borst retired from ABB, previously Kuhlman Electric and now Hitachi ABB Power Grids, as a senior electrical design engineer on June 30, 2020, at the age of 85 with an astounding 56 years of service.
Staying at one company for many years may not be common for younger generations, but it’s certainly not the case for seasoned employees who have started their careers many years ago and shown tremendous loyalty to their companies. Hitachi ABB Power Grids has had a number of employees who have shown their commitment and dedication to the company for 20, 30, 40 and even more than 50 years.
A lot has changed for Borst over the past 56 years. He has seen technology improve, processes continually change, and people come and go. One thing that has remained the same over the last 5-1/2 decades is Borst’s commitment and dedication to the company’s success by demonstrating amazing work ethic.
Originally from Reading, Penn., he and his late wife, Gloria Ann, moved to Crystal Springs in December 1962.
Borst enlisted in the U.S. Air Force from Jan. 14, 1955, until June 13, 1963. He decided to continue his service to the nation and enlisted in the Mississippi National Guard on Feb. 2, 1974, and retired after serving honorably in 1995 at the age 60.
Borst has had quite the work experience over the years. He worked for Burroughs Corporation as a computer data processor technician and was sent to Crystal Springs under government contract to help install the Burroughs Data Processor at the U.S. Air Force Radar Base, which is now the Mississippi Job Corps Center located on Harmony Road. Upon completion of the installation of the data processor and government contract, his work was complete at the radar base, and he had to find another job.
He then started as a design engineer at Kuhlman Electric on June 19, 1964, and later became an ABB employee after ABB acquired Kuhlman Electric in 2008. His work revolved around the complex task of designing transformers, which are vital for distributing electricity through the nation’s power grids to homes and businesses. To this day, the transformers manufactured at the Crystal Springs plant are some of the best in the world.
A man of few words, Borst proudly said, “It has been a pleasure to work for 56 years with a family of such good friends.”