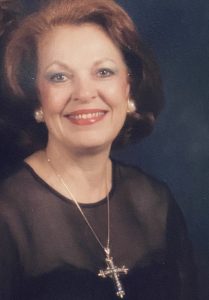 Carol Gwaltney Scott passed away in her home in Hazlehurst on Sept. 23, 2020, after a series of unfortunate setbacks allowed Leukemia to take hold and end a battle with cancer she had held off for many years.
Carol was born Aug. 21, 1936, in McKenzie Tenn., to Robert and Elizabeth Caldwell. She was the eldest of three girls: Carol, Alice, and little sister Jeanne. Their father, Dr. Caldwell, was the town dentist, and her mother taught at the local school. There were many other aunts and uncles who kept a watchful eye over Carol, who enjoyed her role as prankster and cut-up among her friends. It was the close-knit town she was raised in that helped to instill in Carol the strong value of community service and the importance of looking after those who are less fortunate. Over the course of her life, Carol humbly reached out to help both people and animals she recognized needed her attention. Whether it was helping a student who was in trouble, providing clothes and toys for a family who would not otherwise have them, taking on the care of an elderly person without family, or stepping in to help nurture any one of the many animals who found their way to Carol’s backyard. There was always enough time and energy for her to tend generously to all who needed her.
After high school, Carol married her high school sweetheart, Jimmy Gwaltney. They moved to Dallas, Texas, where she eventually finished her degree at SMU and became a teacher. While Jim was finishing his theology degree, they began a family and had three daughters, Leslee, Lisa and Lynda Lee; one each year, three years in a row. As a young mother, teacher, and spouse to a minister beginning a new Methodist church, Carol demonstrated the strength and tireless energy that defined her during the course of her whole life. She told stories about having three girls under the age of three at the same time, with no dishwasher, no washing machine, no disposable diapers, and yet she managed to keep up her studies toward her teaching degree, serve in the role as senior minister’s spouse, and sing in the church choir. “Super woman” was a banner she carried proudly and until her last days, she lived up to that title.
Carol’s teaching career spanned over 30 years as the honors English teacher at Richardson High School in Richardson, Texas. Carol had a true passion for teaching and was motivated by both the bond she developed with many of her students as well as the important life lessons she felt she was imparting through the study of many of the great works of literature. Since her retirement, Carol kept in touch with many of her former students, and the books she taught from remained within easy reach; they are old and tattered but are filled with notes and quotes that served as guideposts throughout her life.
When Carol moved to Hazlehurst in the late 1980s, she very quickly felt at home, as so many welcomed her with open arms into a community filled with energy for life and support for one another. She developed great friendships from her involvement in the church, her love of gardening, her passion for tennis, and her affection for animals, one and all. Hazlehurst and its people gave Carol purpose and deep human connection that filled her with gratitude and kept her strong. While her daughters wished she would return to Dallas to be closer to family, Carol had developed deep roots here, and this had become her home.
At 84 years old, Carol still felt she had so much more to do, and no one was more surprised than her to find that her body was failing when she had so much energy for life left in her heart. Some of that spark came from the strong, self-willed person Carol was born to be, and much of it was due to the love and support she received from being a member of this special town of Hazlehurst, Mississippi. Bless Carol’s life and bless you all.
The family will hold a private service at 11 a.m. on Oct. 10. The service will be livestreamed on the Hazlehurst United Methodist Facebook page, and we invite Carol’s friends and neighbors to join the service online. While it would have been our preference to include everyone in person, we want to celebrate Carol’s life in a safe and responsible way.
Carol was preceded in death by her sister, Alice; and her dear daughter, Lisa, who left us in April. She is survived by her sister, Jeanne Sigrist and husband Carl; her daughter, Leslee Light and husband Bill; daughter, Lynda Lee Butcher and husband Dan; grandchildren, Elizabeth Broome and husband Lee, Callie Butcher and spouse Ashton, and William Butcher; great-grandchildren, Mason and Zoey Broome, and Everett and Rhys Butcher.
If you would like to make a donation in honor of Carol’s life, please consider a donation to the ASPCA, as Carol belonged to numerous charitable organizations benefiting animals and would be honored for contributions to go toward furthering their care.