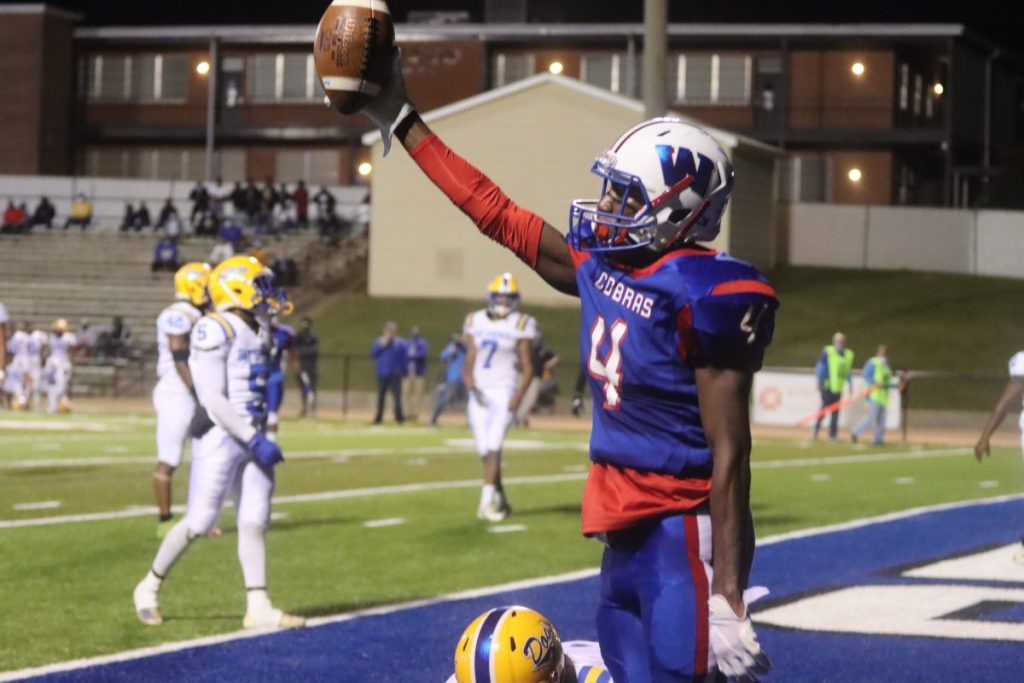 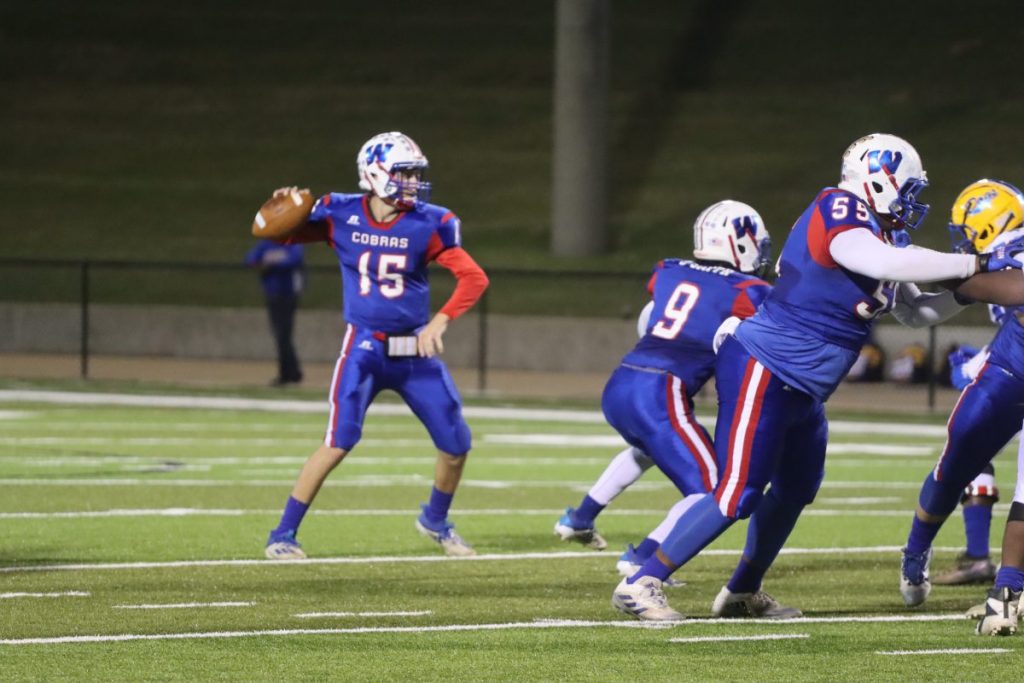 Senior Wesson Cobra wide receiver Antrelle Sims and quarterback Will Loy had an extraordinary game Friday night in Wesson as the Cobras defeated the Bay Springs Bulldogs 56-54 in overtime.
Sims had 283 all-purpose yards with six touchdowns, which consisted of 11 catches for 167 yards and five touchdowns and 116-yards on kickoff returns, with one of those returns being a 78-yard touchdown.
Loy went 20 for 32 passing the ball for 290 yards and also had six touchdowns, five to Sims and one to Chris Davis.
There are a number of things that made this game and these accomplishments special. First, Sims is a senior and one of the team leaders, so it was a win or go home situation for him. The Cobras did just that, and Sims laid it all on the line with his performance, and the stats provide the proof.
Second is the six touchdowns. Wesson Cobras and their fans have a big spot in their heart for number six, that was the jersey number of their fallen teammate Jakerio Miller who died in a car accident back in March when the statewide COVID quarantine was in place. Miller was a big part of the Wesson community and athletic program, especially football in which he wore number six. So, the Cobras have dedicated this season in honor of Miller. Instead of storming out of the end zone and busting through a sign at the first of every game, the Cobras walk out to their sideline carrying a number six jersey with them.
Sims said, “I was just trying to do whatever it took to get the win. I didn’t really realize it was six touchdowns for me at first but when I did, I knew that Jakerio was with me, and I went and found his two brothers on the sideline, and we all hugged, and we all cried together because we knew that it was Jakerio just checking in on us.”
Last but not least, the third and final reason this game was special to Sims was the fact that he was nominated to play in the Mississippi North/South High School Football All-Star game but when the team was selected, Sims’ name was not on the list. The head coach for the South All-Star team is the head coach from Bay Springs.
Bay Springs Head Coach Dan Brady said, “Number four (Sims) was something. Taylorsville has some good receivers, but he is the best I have seen this year.” Brady tipped his hat regarding Sims’ performance.
Sims said, “I had a point to prove to that coach that my name should have been on that All-Star list. I had been telling Coach Loy all week that I was going to give him a reason to realize he should have picked me.”
Wesson Coach Jeremy Loy said, “Antrelle Sims is one of the top receivers in the state. His numbers speak for theirself. He is a great athlete, but his best attribute is his competitiveness. He wants to do and is willing to do whatever it takes to win. When Antrelle gets the ball in his hands, he can make things happen, and he has been a joy to coach over the years.”
In conjunction with receiver Sims, the ball has to be thrown, and that job comes from sophomore quarterback Will Loy. Loy is currently leading the entire state in passing yards, according to MaxPreps, with 2,472 yards. Wesson has played 10 games this season, which means Loy is averaging 247.2 yards a game. He has thrown for 36 touchdowns and only thrown two interceptions on the season.
Loy said, “I have a good group of receivers, and we are all on the same page offensively, and that makes my job easier. They all believe in me, and my coach believes in me, which gives me the confidence I need to make plays.”
Regarding Loy, Coach Loy said, “I have been doing this a long time, and I have not had a quarterback like him ever. He can really do some things with that football, and it’s fun to coach.”
The Cobras are back in action at home in round two of the playoffs at 7 p.m. on Friday, Nov. 13. They will face the Union Yellow Jackets at Stone Stadium in Wesson. If you are a local football fan and your team is out, this could be a good game to watch as you can witness the Loy to Sims connection in person.