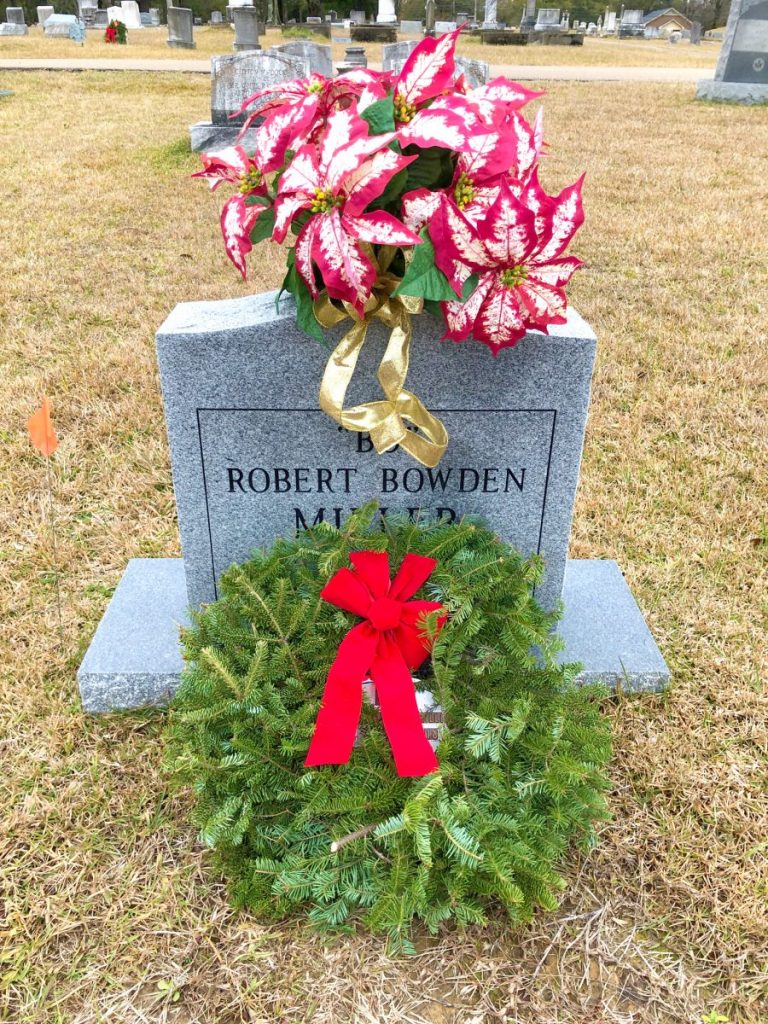 Robert “Bo” Miller is one of approximately 250 veterans buried in the Crystal Springs City Cemetery. He and fellow veterans were honored Dec. 19 in a brief ceremony before volunteers and family members placed wreaths and American flags on their markers.

By Tricia Nelson
Several wreath-laying ceremonies were held around the county this past Saturday to honor veterans interred in city cemeteries. Wesson, Beauregard, Hazlehurst, and Crystal Springs each held a ceremony at their respective cemeteries, and Georgetown held one Monday.
Numerous volunteers were on hand for the ceremony in Crystal Springs. The event was sponsored by the Copiah Chapter Daughters of the American Revolution (DAR), which sells remembrance wreaths through the Wreaths Across America program as both a fundraiser and a way to honor those who have served our country.
Each year, the program gets bigger and this year, the DAR received 189 wreaths. Most of them were for the city cemetery, but some wreaths went to other cemeteries, including Gallman, Pilgrim’s Rest, Strong Hope, Old Crystal Springs, County Line, Poplar Springs, Bethesda, New Zion, Harmony, and Hopewell.
A brief ceremony included the Pledge of Allegiance, the recital of the American’s Creed, prayer, some words about some of the veterans receiving wreaths, and comments by Billy Pitts Jr., who has several family members interred in the cemetery and who recently lost his grandfather, a veteran.
Several members of the Knights of Columbus helped place wreaths. They were also instrumental in helping sell many of the wreaths this year. B&C Auto purchased several wreaths, as well as Crystal Springs Hardware. The chapter purchased flags for the markers which did not receive a wreath.
Some wreaths were purchased to honor specific veterans while others were purchased to honor any veteran in a cemetery. Several families were on hand to lay wreaths for their loved ones. Ann Porter Miller, who is from Hazlehurst and now lives in Gulfport, could not be there, but she always purchases a wreath for her son, Robert “Bo” Miller. Bo was born to Ann and the late Mercer Vowden Miller, of Crystal Springs. His grandparents were Robert and Ruth Porter. He is laid to rest in the England family plot with his great-grandparents. He served in the Army 1982 to 1984. He was talented in art and was employed in the drafting and computer laser industry before his untimely passing at the age of 58. He is just one of the approximately 250 veterans interred in the city cemetery and each of them has a story.
Please consider sponsoring a wreath in 2021. Wreaths Across America accepts orders year-round. From now until Jan. 15, they will match each wreath purchased with a wreath – basically buy one, get one free.
As the sponsorships grow each year, hopefully, one day, every veteran in every cemetery will have a wreath as a small token in remembrance of their sacrifice and service.
To purchase a wreath, contact Tricia Nelson at tnelson39059@gmail.com.