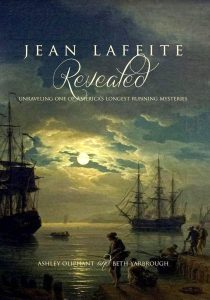 By Tricia Nelson
A long-running mystery has revealed itself. Jean Laffite was a French pirate and privateer who operated in the Gulf of Mexico in the early 19th century. He purportedly died in the 1820s, but no one knew exactly where or when. Mother-daughter authors Beth Yarbrough and Ashley Oliphant have finally solved the mystery. Through extensive research, they concluded he did not die in the 1820s but instead left New Orleans and lived in central Mississippi before settling in Lincolnton, N.C., where he lived for many years before dying at the age of 96 under an assumed name.
The details are laid out in their new book “Jean Laffite Revealed: Unraveling One of America’s Longest-Running Mysteries,” which chronicles who Laffite was and who he became. When he popped up in Copiah County, he had adopted the name Lorenzo Ferrer, which he continued to use the rest of his life.
The rumors circulated about his true identity for over 180 years. The authors, also from Lincolnton, made the trip to New Orleans to begin research on a new Laffite biography and, while enjoying a “fabulous” lunch at Antoine’s, began discussing the legend of Ferrer and whether he could be Laffite. This was the impetus to reveal the truth surrounding that mystery.
The book is fact, not historical fiction, and covers in detail how the writers became expert researchers of all things Laffite. They traveled from New Jersey to Texas and all points in between to unravel the mystery by digging through many repositories, including Ivy League libraries and musty courthouses. Many of the documents they discovered were unpublished, which is why the mystery lay hidden for so many years. It took time, miles, and elbow grease to uncover not only the truth, but also how to piece everything together. There were, and continue to be, twists and turns at every discovery.
Through much research, they determined that Laffite first appeared in Mississippi in Copiah County in 1831, where he was living near Thompson’s Store, owned by Jesse Thompson, which was on Highway 28 at Browns Wells Road. Is it mere coincidence the two fought in the Battle of New Orleans with General Andrew Jackson during the War of 1812?
Ferrer was a land prospector, for there are numerous records of his land purchases, and soon he shows up in Hinds and Madison counties as well. Interestingly, he was married in Hinds County by Methodist minister Elisha Lott, well-known for his role in spreading Methodism in Copiah County and parts of the state in the early 1800s. Through diligent efforts in the Copiah County courthouse and in neighboring counties, the couple was able to piece together Laffite’s movements throughout the area.
They discovered that, in Madison County, he became acquainted with the Henderson family who had ties to Lincolnton, N.C. This led Laffite to move to that area, where he lived out the rest of his life, died, and was buried. The book chronicles many interesting discoveries along the way.
Oliphant notes that although the book is extensive, it is not the end of the story. They continue to make discoveries and anticipate a sequel. Their national book tour will bring them through Mississippi for two stops, one in Biloxi at the Maritime Museum and one in Crystal Springs at the Wisteria Inn May 19, where there will be a book-signing from 6 to 8 p.m. This event is sponsored by the Wisteria Inn and the Copiah County Historical & Genealogical Society.
Other stops include Mobile, Pensacola, New Orleans, Galveston, and Lafayette. The tour will continue through next year, so any interested groups may contact the authors at jeanlaffiterevealed@gmail.com.
Books will be available for purchase at the book-signing. Come visit the authors and pick up a copy of this magnificent book that puts Copiah County in the spotlight.