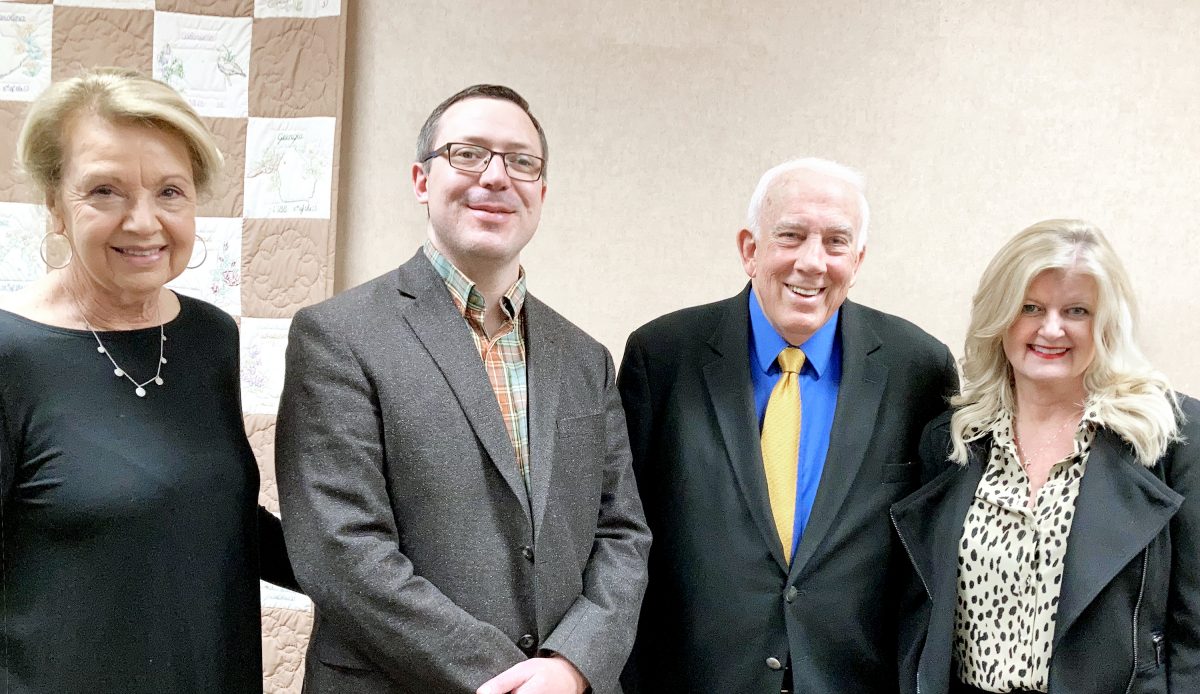 The MacDowell Music Club held its monthly meeting on Feb. 12 at the J.T. Biggs Jr. Public Library. Sixteen members were present along with seven guests. Vice President Martha Traxler welcomed everyone and turned the meeting over to Jim Kitchens, who presented the program on Jimmie Rogers. Two board members of the Jimmie Rogers Foundation in Meridian were guests.
Kitchens began his program by playing several popular Jimmie Rodgers tunes. They included “T for Texas,” which was labeled Blue Yodel No. 1 and sold over 500,000 copies. Kitchens also played “Peach Pickin’ Time Down in Georgia.” Snippets of Rodgers’ recordings were played. They included “Nobody Knows but Me,” “Waitin’ for a Train,” “He’s in the Jailhouse Now,” and “TB Blues.” Rodgers died in 1933 shortly after writing “TB Blues.” Rodgers contracted TB probably from his work on the railroad.
Kitchens was always impressed by the simplicity and clarity of Rodgers’ music. One recording included horn played by Louis Armstrong, which emphasized the blues aspect of Rodgers’ music. Rodgers was the very first inductee into the Mississippi Musicians Hall of Fame. The Country Music Hall of Fame acclaims Rodgers as “The Man Who Started It All.” He was also known as “The Father of Country Music,” “The Singing Brakeman” (from his work on the railroad), and “The Blue Yodeler” (many of his songs were labeled “Blue Yodel No. 1-12). His principal collaborator was his wife’s sister, Elsie McWilliams. She wrote or co-wrote at least 39 songs for Rodgers.
Kitchens shared that Rodgers had a Crystal Springs connection. His first cousin was the late W.C. Rodgers. In closing, he read the words from “Whoopin’ that Ole TB.”
Door prizes from the museum were presented to those who could answer trivia questions from the program. Laura Carmichael invited everyone to visit the museum in Meridian and also to attend the Jimmie Rodgers Festival scheduled for this year in May.
After the program, everyone enjoyed Valentine’s Day refreshments provided by Nancy Sullivan, Susan Snyder, and Jan Cohn. Then, President Leslie Horton called the meeting to order. The National Federation Collect was recited and the National Federation Hymn sung. Martha Traxler directed, and Nancy Sullivan accompanied. Billie Jane Davis, Together We Sing chair, read the background material for “I Love a Piano,” a song by Irving Berlin. Margaret Druetta read a thank you note from Elizabeth Easley, the club’s candidate for Tomato Queen in June 2021.
Committee reports came from lnza Calloway. “A Grand Night” program will be April 1 at First Baptist Church Crystal Springs. Another community program, “Talent Springs,” in Crystal Springs is tentatively scheduled for Aug. 5 at Crystal Springs United Methodist Church.
The Musical Tour of Homes will be held on May 14. Four homes will be featured. Everyone in the club has an assignment for that day. Call Nancy Sullivan with questions.
Mary Kitchens gave an update on the music room at Camp Kamassa. Workers from the Marines and Navy will be here for eight weeks sometime this year to complete the project.
Musical opportunities were reviewed by Leslie Horton. Check out websites for Mississippi Symphony, Mississippi Opera, Mississippi Community Symphonic Band, and Ballet Magnificat.
The next meeting will be on March 12 at First Baptist Crystal Springs. Judy Evans will present the program. Host/hostesses are Laurie Gwaltney, Jim Kitchens, Steve Russell, and Leslie Horton. The accompanist is Susan Sullivan.
The meeting closed with the singing of “The Gift of Song.”