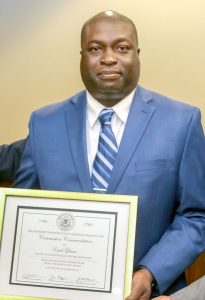 In honor of Black History Month, the Mississippi Department of Transportation highlighted the first African American District Engineer in MDOT’s history, Earl Glenn. He was also recognized by the Mississippi Transportation Commission at their Feb. 22 meeting for being MDOT’s first Black district engineer.
“For me, it was more of trying to come and help do my part to help move MDOT along, so I guess having that distinction is a bonus, but at the same time I am here to do a good job for District Three,” said Glenn.
On July 1, 2021, Glenn, a longtime engineer and dedicated MDOT employee, began his new role as District Engineer for District Three. The district includes Copiah, Bolivar, Sunflower, Washington, Humphreys, Holmes, Sharkey, Yazoo, Issaquena, Warren, Claiborne, Jefferson counties.
Glenn was promoted to District Three engineer after spending more than 20 years working hard and climbing the ranks at MDOT. He spent 10 years in the project office and 13 years in the Construction Division. Glenn says he never planned to become district engineer, but it has quickly become a role he can’t imagine himself without.
“There could be others that could come along behind me, and you always want to have something to aspire to that you know can be achieved and if I could be a good example for them, for myself, for the department, hopefully, it will lead to others being appointed to such roles,” said Glenn.