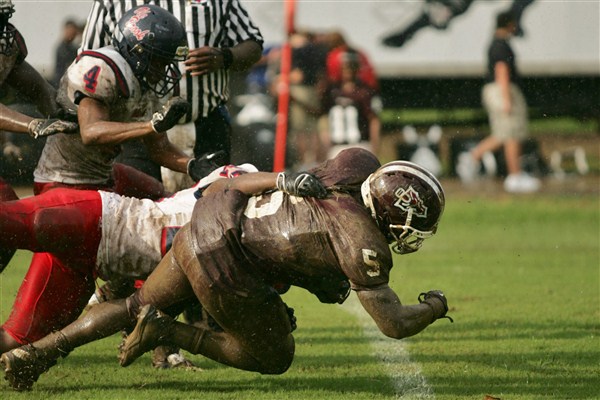 Indians slip, slide their way to win over Brookhaven

The long wait for the big game between the Brookhaven Panthers and the Hazlehurst Indians went one more day than expected, thanks to the impact that Tropical Storm Isaac had on the Copiah and Lincoln County areas last week.  The game was post-poned from the normal Friday evening time-slot and was further delayed, still, by thunderstorms which lingered in the area all Saturday afternoon.Though the playing surface at McDaniel Stadium resembled swamp land around Bayou Pierre Creek, the Indians dominated the Panthers 24-7 here Saturday afternoon.
Hazlehurst led 6-0 after one period when senior running back Demetrius Cain plunged in from 5 yards out. The PAT was no good.
The Indians extended their lead to 12-0 on running back Aaron Larry’s 1 yard dive in the second.  His score was set up by a 50 yard romp down the right side line by running back Freddie Nelson on the first play of the second quarter.  Again the PAT failed.
Brookhaven cut the lead to 12-7 four plays later when  big running back Demarius Newton splashed in from the 5.  Noah Allen added the Panther extra point.
But, that was all the Panthers would get.
In the second half, the Indian passing game took over, leading to two more scores.   The first came on a Kenneth Coleman-to-Aaron Larry 17 yard pass play in the third quarter.  In the fourth, after a big fourth down sack by Indian lineman Jonkil Skipper, Hazlehurst head coach Randal Montgomery  reached into his bag of tricks.  The Indians ran the halfback pass to perfection, as Cain hit Dedric Reese for a 24 yard TD on the ensuing play.
That insurance score killed any threat that the Panthers could have put up, as Indian defense clamped down and kept the pressure on Brookhaven until the clock read 0:00.
Larry led Hazlehurst with 76 rushing yards, including one touchdown.  He also had the one TD pass from Cain.  Cain added 54 rushing yards and one score.  Quarterback Coleman had a very productive game with 112 yards passing and one TD pass.
Javarious Tanner, a Copiah Bank Player of the Week, led the Indian defense with 11 tackles, including three for loss, one sack and one fumble forced.   Skipper added nine tackles.
The Indians, 3-0, are back on the road to face 5A Wingfield this Friday night.  The Falcons are 0-3 after losing 26-8 to Raymond last Friday night.  Kickoff is scheduled for 7:30 p.m.