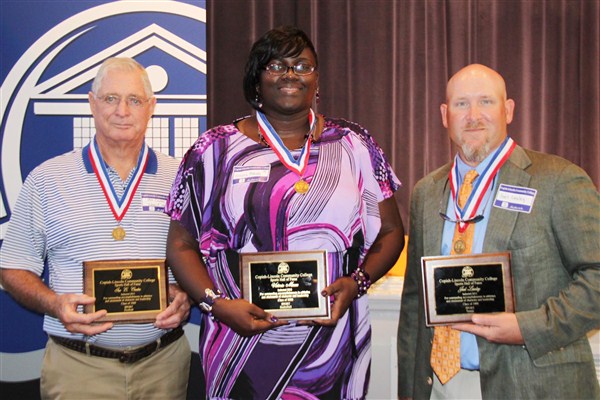 CO-LIN INDUCTS 4 INTO SPORTS HALL OF FAME – Ira E. Coates of Prentiss (left), Victoria Mason of Hazlehurst and Joel Lessley of Natchez were installed (along with Christopher Dunn of Magee who was unavailable for the ceremony) into the Co-Lin Sports Hall of Fame on Saturday morning as part of the school’s 2012 Homecoming program. Coates was a standout fullback at Co-Lin and played in the Junior College All-American Game in Albuquerque, N. M., in 1959. Mason led the Lady Wolves basketball team to

Coaches from Co-Lin sports teams updated the gathering on academic and athletic achievements throughout the past year.  The Wolfpack football team later played against Gulf Coast and was defeated 59-41.

The new Hall of Fame inductees were presented as pictured above: Ira Coates, Victoria Mason and Joel Lessley, plus Chris Dunn, who was attending a family wedding.

Afterward a business meeting was held that included the nominating committee’s report and election of new officiers.  Chris Calcote will serve as President for 2012-13.  Curtis McMillian is Vice-president, and Alton Ricks, secretary.

A luncheon was held on the school’s cafeteria after the program.  Inductees also made appearances at the tailgate party in the center of campus.  The four former Co-Lin athletes were also recognized at halftime of the football game later in the day.