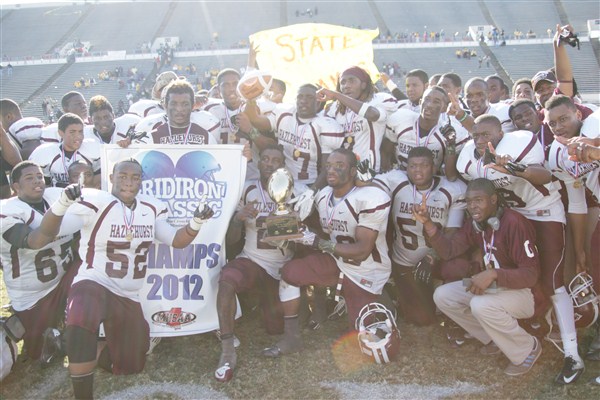 The Play made highlights on ESPN over the weekend.  The Play was a change of fortune that propelled the Hazlehurst Indians to the MHSAA state 3A football championship on Saturday afternoon.  The Play will be talked about. . .perhaps, forever!
The Play happened with 4:21 remaining in the fourth quarter.  Hazlehurst was trailing Charleston 14-13, but had driven inside the Tigers’ ten.  Running back Demetrius Cain was popped after taking the handoff from quarterback Kenneth Coleman, and the ball flew through the air.  Charleston defensive lineman Jamal Brock recovered the ball at the goal line and began running towards his end zone.  An alert Dycelious Reese, wide receiver for the Indians, stripped the ball from Brock and took two steps into the end zone for the go-ahead score for the Indians.
On the ensuing two-point conversion try, Coleman’s pass to Cain was complete, giving Hazlehurst a 21-14 lead.
No matter that Charleston ran the following kickoff back to cut the score to 21-20.  The Indian  defense stopped Charleston’s two-point conversion with just over 4:00 left and held on to preserve the second 3A state title for the school.
That defensive stand by the Indians was the fourth such in the game.  Charleston was stopped twice in the first half and one other time in the third quarter after driving inside the Indians’ 10 yard line, turning the ball over on downs each time.
The Tigers scored first on a 61 yard pass play just over 2 minutes into the game.  The two-point conversion was good, and the Tigers led 8-0.
Hazlehurst scored just 2 and-a-half minutes later when Cain darted 50 yards to the end zone.  The successful PAT by Reese cut the score to 8-7, where it stood until halftime.
Neither team scored again until the fourth quarter.  Hazlehurst put together a nice drive capped off by Coleman’s 6 yard run with 11:51 remaining.  The Tigers blocked the extra point, and Hazlehurst led 13-8.  Moments later, the Tigers took the lead on a one yard run, but failed at the PAT.  Charleston lead 14-13 with a little over 8 minutes remaining, which was the last time the Indians trailed.
Then, The Play happened, followed by the kick return, creating the final margin of 21-20 for the Indians.
“Charleston has a great team, and they fought with us to the end. We’re just so excited, blessed, and humbled to be the 2012 MHSAA Class 3A State Champions!” said Indian head coach Randal Montgomery.
“Overall, I thought we played really well as a team. We executed about as good as we have all season,” said Montgomery.  “We had some breakdowns on special teams, but we were able to overcome those with our offense and definitely our defense.”
Hazlehurst avenged last year’s 34-6 loss to Charleston in the 2011 3A title game.  “We talked all spring, summer, and fall about making it back to Jackson to redeem ourselves after playing so poorly last year,” Montgomery said.
Over the past few weeks the Hazlehurst community rallied behind the team, who methodically won game after game and came into the championship contest with a perfect 15-0 record.  Seemingly everyone reached out wanting to help and be a part of what many were hoping would be another championship run.  “I really want to thank all of the fans that have supported this team and our coaches over the past two seasons. They were there in full force Saturday, and they played a major role in that victory,” Montgomery added.
Hazlehurst was led by a brutal ground game, mixed in with a few passes.  Cain led all rushers with 138 yards on 17 carries.  D’Alex Rockingham, who had several big third down carries, rushed 7 times for 46 yards. Coleman finished with 8 rushes for 33 yards.  Aaron Larry carried 4 times for 17 yards.
Coleman completed 3 passes for 43 yards, with Cain catching 2 for 26 and Dedric Reese, 1 for 17.