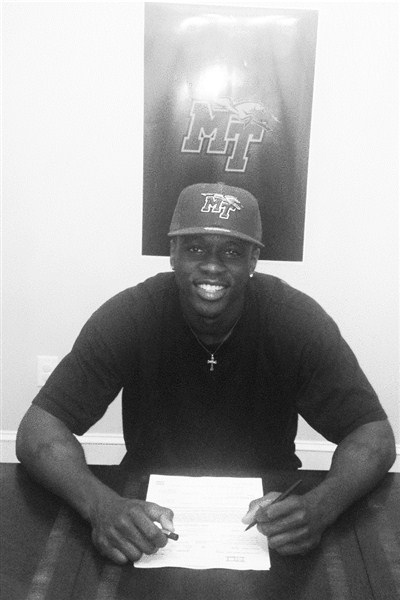 Middle Tennessee Head Football Coach Rick Stockstill announced today the signing of Wide Receiver Chris Perkins to a scholarship agreement.
Perkins  6’6”, 215, played last season at Pearl River Community College where he hauled in 19 passes for 318 yards and 5 touchdowns while missing 3 games due to a high ankle sprain. The Hazlehurst native originally signed with Alcorn State coming out of high school and as a true freshman hauled in 7 receptions for 127 yards.
Perkins, who redshirted in 2011, was rated as one of the Top 125 players in the state of Mississippi by the Clarion-Ledger coming out of Hazlehurst High School.
“Chris is a big, strong, physical receiver who should have an immediate impact on our offense”, said Justin Watts, MTSU receivers coach. “We look forward to having him here in January so he can go through our offseason workouts and spring practice.”
Chris garnered attention from over a dozen Division 1 colleges to include Mississippi State, Louisiana Lafayette, Troy University, North Texas, Arkansas State, Southeast Louisiana, Texas Southern, Grambling University and Alcorn State.
“I had a great visit to MTSU and was very impressed with their coaching staff and their facilities”, said Perkins. “They have an exceptional passing game and I look forward to coming in and contributing immediately.”
MTSU will make their entrance into Conference USA this year from the Sunbelt Conference.
Chris will enroll in MTSU in January 2013 as he has completed his course requirements for an Associate’s Degree in Mass Communications from Pearl River Community College and will participate in the Commencement Exercises in May 2013.
Chris is the son of Chris and Sandra Perkins who now reside in Byram.
Posted in Sports