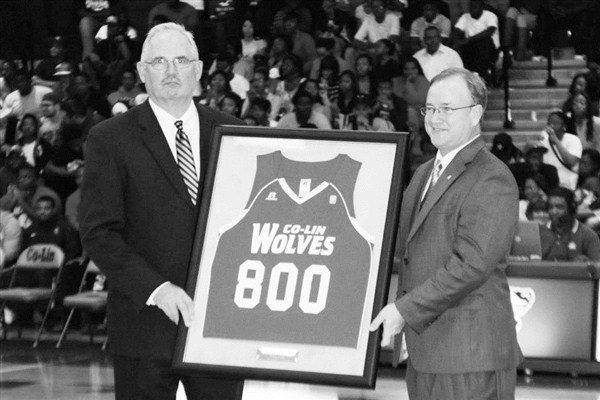 WESSON – Copiah- Lincoln Community College Athletic Director and Women’s Basketball Head Coach Gwyn Young was honored for his 800th career win after the women’s game against Southwest Mississippi on Thursday, Feb.  7. Young earned the win on Nov. 13, a 71-65 win over the Southern-Shreveport Lady Jags.
Young has been head coach of the Lady Wolves basketball team since 1975. He is currently the NJCAA’s and the Mississippi Association of Community and Junior College’s (MACJC) Winningest Active Coach.
Young has put the Lady Wolves on the map as one of the nation’s most premier women’s basketball teams. Under his direction, the Lady Wolves have accomplished numerous awards including 23 MACJC Regular Season first place finishes, 17 MACJC South Division Championships, 22 MACJC State Tournament Appearances, six MACJC State Championships and been runner-up to the MACJC State Champions eight times.  The Lady Wolves have won seven NJCAA Region XXIII Championships, been runner-up to the NJCAA Region XXIII Champions nine times and made six NJCAA National Tournament appearances. His teams have finished seventh in the 2010 National Tournament, sixth in the 2007 and 2011 National Tournament, fourth in the 1989 National Tournament and have been consistently ranked each year by the NJCAA Polls.
He was named Region XXIII Coach of the Year in 1989, 1993, 1997, 2002, 2007, 2010, 2011 and MACJC and Mississippi Association of Coaches Coach of the Year in 1993, 2001, 2007, 2010 and 2011.  The Clarion-Ledger has also recognized him as Coach of the Year for Junior College on numerous occasions. Young was inducted into the Mississippi Association for Community and Junior College’s Sports Hall of Fame in 2012 and the court in Mullen Gymnasium was named in his honor in 2011. He will be inducted into the National Junior College Athletic Association’s (NJCAA) Women’s Basketball Hall of Fame in June.
A graduate of Copiah-Lincoln where he was a standout for the Wolves basketball team, Young was inducted into the college’s Athletic Hall of Fame in 1997. After graduation from Co-Lin, he attended Mississippi College where he was team MVP and a team captain.  Young received his bachelor’s degree from Mississippi College and master’s degree from the University of Southern Mississippi. He has served as athletic director at Co-Lin since 1989.
He is married to the former Velesta Smith. They have two grown children, Lane and Jessica, and four grandchildren, Mailey Kate Young, Justin, Mary Gwyn, and Grant Young Hynum.
Posted in Sports