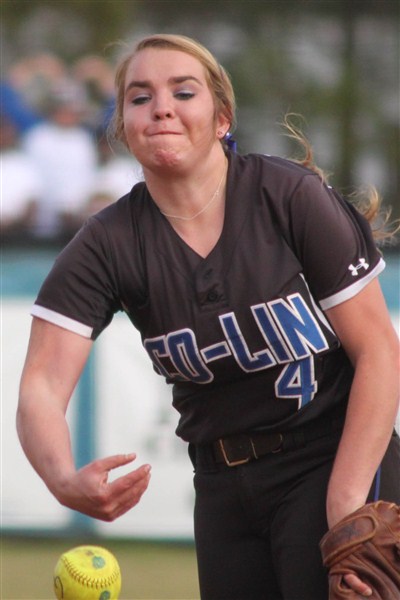 WESSON – The Co-Lin Lady Wolves came out on the short end of their South Division opener with East Central. The Lady Warriors took the first game 7-4 and 6-4 in game two.

The Lady Warriors scored two runs in the first inning, but Co-Lin answered with a run in the bottom half of the inning as Karla Beth Hux singled and later scored on a single by Shelby Mitchell.
The visitors scratched two more in the third, but Co-Lin would tie the game at 4-4 with a three-run third inning. Hux hit her second single of the game and scored on Mitchell’s double to left center field. Hannah Roberts was hit by a pitch, then Beth Fortenbery drilled a two-run double to right center.
Aided by an error, the Lady Warriors took a 7-4 lead in the fifth inning.
Brooke Gonzales (7-2) suffered the loss, giving up nine hits with five strikeouts and a walk.
Mitchell went 3-for-4 with 2 RBIs to pace the hitting attack. Hux added three singles. Josie Porter doubled and singled. Fortenberry doubled and Kayla Craft added a single.
“We out hit them 10-9, but left eight runners stranded on base,” said Co-Lin Head Coach Allen Kent. “We’ve got to do a better job with runners in scoring position. East Central has a solid team, but I feel like both games could have gone either way. Brooke wasn’t at the top of her game today, but she’ll bounce back. We’ve got a lot of confidence in our pitching staff.”

Co-Lin took and early 1-0 lead in the second as Missy Romero smashed a leadoff double to left field. She advanced to third on Shelby Mitchell’s single to left and later scored on Hannah Roberts’ fielder’s choice.
East Central scratched a run in the third to tie the game at 1-1. The Lady Wolves responded in the third as Bradi Davis singled to center and Porter singled to left. Karla Beth Hux continued her torrid pace with a three-run homerun to left field to give the Lady Wolves a 4-1 lead.
In the fourth inning, the Lady Warriors scored three runs aided by an error. They added single runs in the sixth and seventh innings for a 6-4 lead.
“We left four runners stranded in the last three innings, including the tying runs in the seventh,” said Kent. “Again, we just didn’t get the key hits when we needed them. We got out-hit 10-8, but had our chances.”
Meghan Johnson absorbed the loss tossing six innings, scattering 10 hits and allowing four earned runs. Chynna Coghlan relieved Johnson with a runner on in the seventh inning and did not allow a hit.
Hux’s 2-for-3 effort paced the Lady Wolves. Porter singled twice. Johnson also added a single.
The Lady Wolves travel to Gulf Coast Wednesday for a South Division doubleheader.