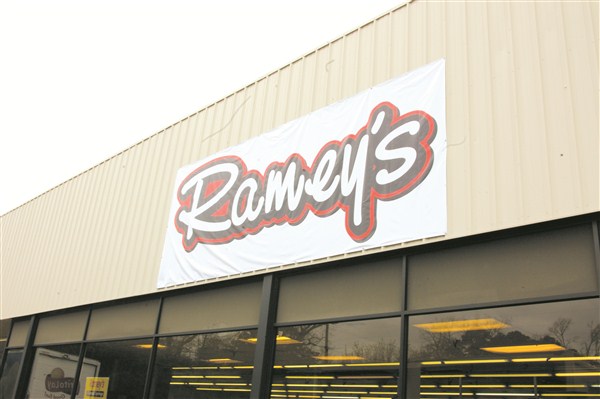 A large banner marks the opening of the new Ramey’s Marketplace in Crystal Springs. Store owner Brad Ramey said he expects a new permanent sign to be delivered and installed in a few weeks.

A new grocery store is opening in Crystal Springs on Wednesday, March 13.  Ramey’s Marketplace,  headquartered in Purvis, Miss. and has stores in 18 other locations throughout Mississippi and Alabama, purchased the building at 509 W. Marion Avenue from the former owners in early February.
Personnel from Ramey’s have been working to prepare the store for its opening since late February.  From top to bottom and wall to wall, workers have removed existing equipment, including coolers and freezers, shelving units, cash registers and signage, and are installing everything brand new.  A temporary banner has been placed on the front of the building, while the brand new Ramey’s sign is being constructed.  The new sign is scheduled to be installed around the first week of May.
The owner, Brad Ramey, visited the new store last Friday and was pleased with the progress.  “Right now, we are on schedule to open on Wednesday.  We’ve run into a couple of bumps along the way, but nothing major,” he said.
“We are very excited and happy to be in Crystal Springs and look forward to serving everyone in Copiah County and the surrounding area.  We want everyone to know that we are eager to open,” Ramey said.  He added that though some may be unfamiliar with Ramey’s, everyone will be happy to know that Ramey’s is a price and selection leader.  “Shoppers will be able to find everything on their list here,” he said.
Ramey said that the 60-year-old company prides itself on a top-of-the-line meat department, as well.  “We strive to ensure that the meat department in all of our stores is the absolute best.  Our customers have come to expect it,” he added.
As far as employment, Ramey’s has hired as many local people as possible, Ramey said.  He expects to employ around 50 at full staff, which will have a great economic impact on the area.
Customers of Rameys are urged to sign up for their own free Ramey’s Reward Card in person at the new store.    Each time the card is swiped, the customer earns points that can be redeemed for valuable savings or exciting merchandise, according to www.rameysmarketplace.com.  Customers can also keep track of their points at that website.
Rameys will advertise locally by placing weekly inserts in both newspapers that serve the county–The Copiah County Courier and The Meteor in Crystal Springs.  Shoppers will enjoy new specials every week and the convenience of home delivery if they are subscribers to the newspapers.  “Our newspaper partners are highly crucial to our success.  We urge all local customers to subscribe to our local papers, not only to have our inserts delivered to their homes each week, but also to enjoy the local news and events presented by these organizations each week,” Ramey added.
Posted in News