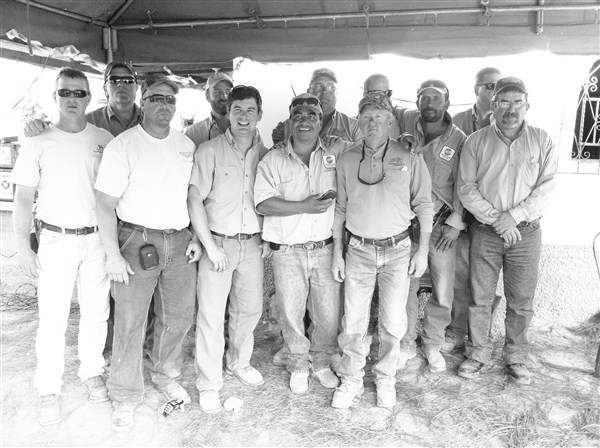 TAYLORSVILLE – Two Southern Pine workers recently returned from a two-week trip to Guatemala to help bring safe, reliable electricity to Jalapa, a small town in the mountains.
Jimmy Arender from Southern Pine’s Newton district and Travis Butler from the New Hebron district were among a group of Mississippi electric cooperative volunteers working in the Central American country.

Guatemala is one of the poorest countries in the world, with 7 out of 10 people living in poverty.  In addition, much of the rural population is without electricity, a key factor in development.
“They don’t have anything. They are very happy, though. They are very courteous and very thankful,” said Arender.  “They are trying to get where we are in terms of quality of life. They’re real poor, but they are content. I guess when you have never had a cell phone or a TV, you don’t miss it.”

The Mississippi volunteers worked with a Jalapa electric company to build primary and secondary lines through the mountains and nearby villages.

“The linemen in Guatemala were really interested in learning better and safer ways to work,” said Butler. “The people in those villages wanted us there bad, and they were doing everything they could to help. It was a joint effort on everyone’s part.”

This is the second year that Southern Pine has sent volunteers to Guatemala as part of a National Rural Electric Cooperative Association (NRECA) program to bring electricity to other parts of the world.  Arender and Butler were part of a group that included volunteers from East Mississippi, Dixie, Singing River, Yazoo Valley and Pearl River Valley electric power associations.
The experience was also eye-opening because they were given a chance to see and experience what it was like for people to receive electricity for the first time.

The rural electrification programs that NRECA International has established have provided over 100 million people in 40 developing countries with access to electricity.

Southern Pine Electric is a member-owned cooperative based in Taylorsville with offices in Brandon, Newton, New Hebron and Hattiesburg. It distributes power to more than 65,000 meters in 11 counties.