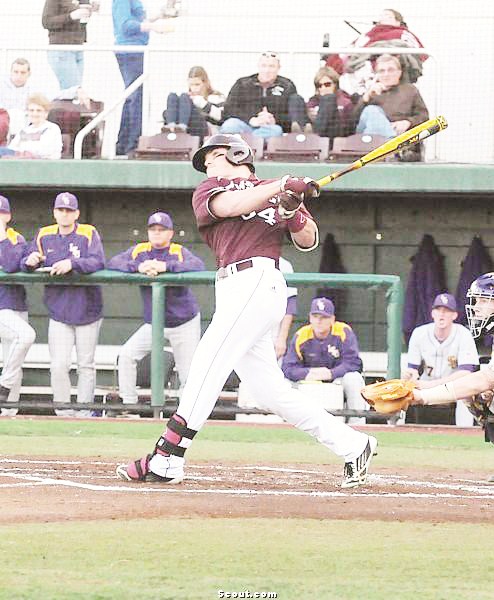 Hunter Renfroe, hitting one of his club-leading homeruns, against LSU earlier in the season. Photo courtesy Scout.com.

Hunter Renfroe was born to play baseball. His parents, Todd and Tammy Renfroe of Crystal Springs, can vouch for that. “He was practically born with a ball in his hand,” says Tammy. “As a toddler, he used to walk around the house with a Tupperware bowl on his head and a ball and bat in his hand.”
Fans who watched him play at Copiah Academy aren’t surprised he’s the Mississippi State Bulldogs’ leading hitter this season. The junior right fielder leads the team in batting (.407), home runs (13), RBI’s (42), total bases (110), and sacrifice flies (6). He’s tied for first in stolen bases (8) and doubles (12), and ranks second in hits (55), walks (21), runs scored (37) and multi-hit games (17). He’s also had a 15-game hitting streak, a 4-hit game, five 3-hit games, and a dozen games with 2 or more RBI’s.
“Hunter is the most talented young man I’ve ever worked with,” MSU head coach John Cohen told the Meteor in a phone interview last Friday. “You hear this expression, but he truly has the ability to be a 5-tool player. He’s extremely talented and works very hard. Plus, he’s really learned the game over the last 2½ years. Actually, he’s become a student of the game, and that was the only component missing. His future is limitless, and I believe Hunter will be a high (MLB) draft pick in June.”
If and when that happens, Hunter’s lifelong goal will be realized. Just like a lot of little boys, he dreamed of playing professional baseball. And because of his innate talent, his work ethic, and his passion for the game, that dream is about to become a reality. Last Saturday he paused to speak with the Meteor from College Park Station, Texas, where MSU was in the middle of a 3-game series against Texas A&M.
“I’m just trying to stay on track,” Hunter said. “This is my first real year to start. The difference this year is I’m learning to lay off pitches in the dirt and I’m staying back on the ball. I’m seeing the ball and have worked on my rhythm and stance. Things have really come together – and that comes with experience.” He credits much of his success to playing summer ball.
The 3-game series at Texas A & M on April 12-14 was an example of what Hunter’s been doing all season. On Friday night with the Bulldogs trailing 2-0, he doubled home a run and later drove in what proved to be the winning run with a solo homer in the sixth inning of a 3-2 victory. On Saturday, he homered again, and had 3 hits in a 9-3 win. And in Sunday’s finale, he had 3 hits again, one of them a solo HR leading off the ninth, as the Bulldogs clobbered the Aggies 15-4 for the 3-game sweep.
“I want to thank my mom and dad for their support through the years,” Hunter said. His dad, Todd, helped coach him while he was growing up. “And I want to thank Coach Cohen and all the coaches at State.”
He also expressed appreciation to Chase Wroten’s family. Chase was Hunter’s best friend and a pitcher on the Hinds Community College baseball team when he collapsed in a game on April 13, 2011, and died of an apparent aneurysm. Chase’s parents have continued to be two of Hunter’s biggest fans.
Hunter declines to talk about the upcoming MLB draft and the decision he’ll likely have to make. Instead, he’d rather focus on this year and what he can do to help the 16th-ranked Mississippi State Bulldogs continue to be successful.
The Bulldogs took 2-of-3 from Auburn this past weekend during ‘Super Bulldog Weekend’ and trail LSU and Arkansas in the SEC Western Division race.  State was at Memphis on Tuesday and will face Vanderbilt in Nashville for a 3-game series this weekend.
“HR” in baseball is the abbreviation for “home run.” And “HR” are also the initials for “Hunter Renfroe.” Quite appropriate, don’t you think?!