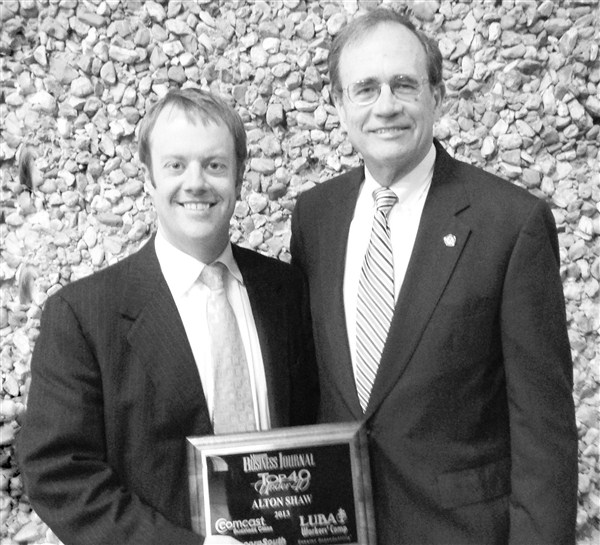 Jackson — Wesson Mayor Alton Shaw has been named to the Mississippi Business Journal’s Top 40 under 40, one of Mississippi’s most prestigious awards programs.
The Top 40 Under 40 recognizes the state’s 40 up-and-coming business leaders under the age of 40.
“I’m excited and very humbled by the designation,” Shaw said of his selection. “It’s an honor that is equally attributed to the people I have had the opportunity to work with.”
Shaw, 38, was initially elected as mayor for the Town of Wesson in 2003.  He holds multiple collegiate degrees, and has worked professionally as both a paramedic and a registered nurse in a local emergency room.  In 2011, along with his wife and a few friends, he founded Life View Ministries, a Christian non-profit aimed at mentoring fatherless children and providing medical missions.
As a lifelong resident of Mississippi, Mayor Shaw is married to Christy Funderburke Shaw, and has two children, Benjamin 13, and Parker 9 months.
In order to qualify for consideration, individuals must have been born after Dec. 1, 1972, and have lived and worked in Mississippi for at least two years.
Individuals selected as recipients of the Top 40 Under 40 award will be profiled in a special publication in 2013, and a luncheon was recently held in their honor.
“The Top 40 Under 40 program seeks to identify and recognize individuals who have made significant contributions to Mississippi’s overall economic progress, often working at their own local levels,”
“Since its inception in 1993, the Top 40 Under 40 program has honored hundreds of Mississippi business leaders who are playing active day-to-day roles in moving the state’s economy well into the 21st century.”
Shaw’s civic and economic contributions to the community have been extensive, and when combined with his business leadership skills, were both major factors in his selection.
Shaw serves on multiple boards, including the board of directors for Central MS Planning & Development, Executive Committee and Board of Directors for the MS Municipal League, was appointed twice by Governor Barbour to the EMS Advisory Council for the state, and most recently was appointed by Governor Bryant to serve on the MS Board of Nursing.
Shaw stated that his ultimate goal in life was to simply fulfill his biblical mandate, “Everything I’ve done in my life, from medicine to politics has revolved around one central aspect, helping others.”
Posted in People