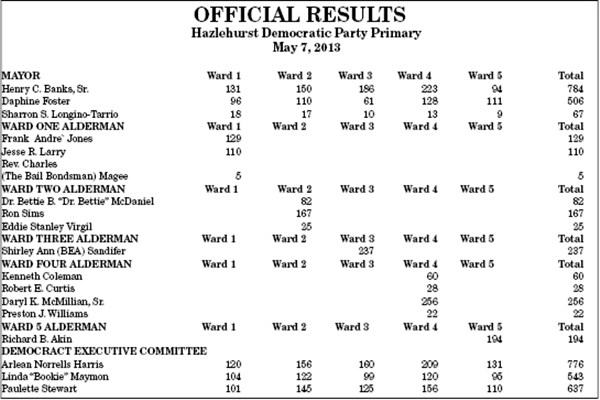 The Hazlehurst Democratic Executive Committee has certified the results of last Tuesday’s primary election.  Official results show incumbent mayor Henry Banks defeated challengers Daphine ‘Polly’ Foster and Sharron S. Longino-Tarrio in the primary.  Banks garnered 57.7% of the vote, while Foster captured 37.2% and Longino-Tarrio received 5.1%.
Three incumbent aldermen had challengers.  Voters in Wards One, Two and Four had to decide between at least three candidates in each of those races.
In Ward One, Frank ‘Andre’ Jones, the incumbent, defeated challengers Jesse R. Larry and Rev. Charles Magee.  Jones got 52.3% and will retain his seat without a run-off.
In Ward Two, incumbent alderman Ron Sims  defeated Dr. Bettie McDaniel and Eddie Stanley Virgil with 61.4% of the vote and retained his seat.
Daryl K. McMillian, Sr., the incumbent in Ward 4, got 70.8% of the vote, defeating challengers Robert Curtis, Kenneth Coleman and Preston Williams.
Since all races were decided with incumbents earning over 50% + 1 of the vote, no runoff will be needed and all will be sworn in on July 1 for a new term.
Two races were uncontested.  Alderman Shirely Ann “Bea” Sandifer in Ward Three and Alderman Richard B. Akin in Ward 5 will return to their post in July.
Arlean Norrells Harris, Linda “Bookie” Maymon and Paulette Stewart were all elected to the Democratic Executive Committee.